A 13-hour concert? This Day of Music promises to please everyone and test some limits

A 13-hour concert? This Day of Music promises to please everyone

By Joel Luks
Jul 12, 2013, 7:02 pm
Enlarge
Slideshow
Clandestineis a favorite at McGonigel's Mucky Duck, usually selling shows days in advance (11 a.m. on the Front Lobby Stage). Photo by Leisa McCord
Joy of Djembe Drumming is a 22-member ensemble that explores the spiritual side of African drumming (12:30 p.m. on the Outside Patio Stage). Joy of Djembe Drumming/Facebook
Kaminari Taiko's thunderous drumming is coupled with stunning choreography (noon on the Main Stage). Courtesy photo
Mercury - The Orchestra Redefined performs on period instruments (1:30 p.m. on the Lower Lounge Stage). Photo by © Simon Gentry
The Wheel Workers perform at 3 p.m. on the Rear Lobby Stage. Photo courtesy of Mark Austin

Got the music in you? Do you walk with a spring in your step and a tune in your head?

Music enthusiasts have a challenge this weekend as the Houston Symphony hosts a 13-hour marathon Saturday concert plus activities at Jones Hall. The tuneful gathering amasses 27 performing groups whose collective output reflects the cultural diversity of Houston.

That's all fine and dandy, but chances are you're not inclined to wear a diaper to persist through a day-long melodious debauchery.

So how do you decide when to attend and where to be? Below are CultureMap's top picks alongside the complete event's schedule.

This Celtic band is a favorite at McGonigel's Mucky Duck, usually selling shows days in advance. The original songs penned by singer and percussionist Emily Dugas, whose bodhran (Irish drum) chops are mesmerizing, are lyrically beautiful, many of which are set in three part harmony with piper EJ Jones and fiddler Gregory McQueen.

You have no choice but to be taken by the powerful thumping of the djembe, an African drum capable of producing a huge range of timbers. The hypnotic rhythms summon your inner primordial spirit, particularly in the hands of this 22-member ensemble.

While we tend to think of the strummed instrument as one belonging to current popular genres, its history is rooted in secular tunes dating back to before the common era. What's considered the modern version of the instrument started taking shape around the 12th century.

This group of men songsters has been entertaining and inspiring Houstonians since it was founded more than three decades ago. These chaps know how to have fun — on stage and off stage — with performances that are musically delightful and brimming with showmanship.

ROCO — rhymes with loco — is the hipper way of referring to the River Oaks Chamber Orchestra. The ensemble's Brass Quintet executes scores with verve such that experiencing a live performance is akin to getting happy from the latest on-trend narcotic.

How is it that a clarinetist triumphed over pianists and string players in the 2013 Houston Symphony Ima Hogg Competition? The odds of such a thing happening are slim, which is why hearing Israeli clarinetist Moran Katz solo, with the support of maestro Cristian Macelaru, is the ideal curtain closer to this musical adventure. 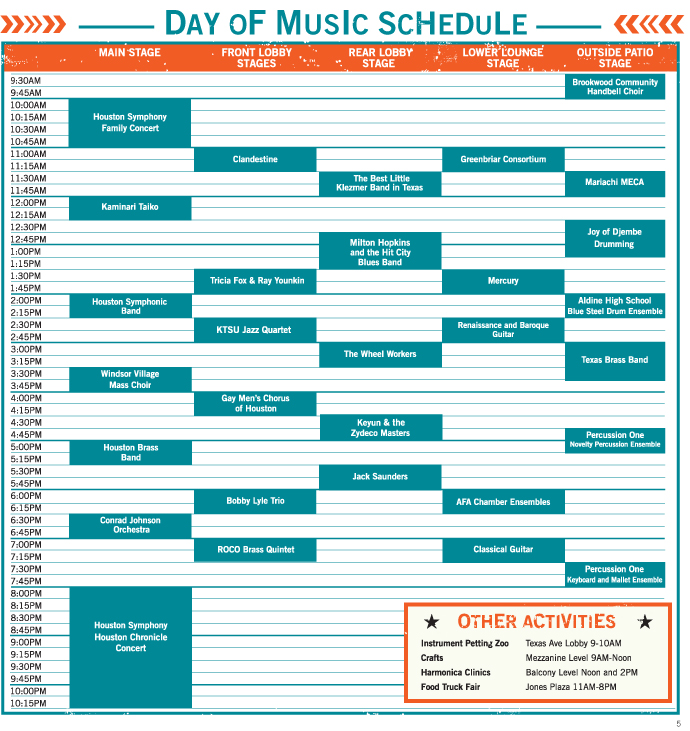 Day of Music: A Free Day-Long Celebration of Houston's Musical Diversity is on Saturday, 9 a.m.-10 p.m. at Jones Hall. The event is free and tickets are not required.