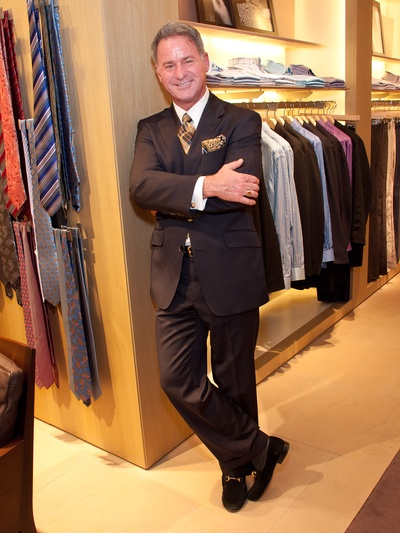 No surprise that the dashing Terry Wayne Jones is always impeccably dressed. He should be. Jones founded Wayne Jones Custom Suit & Shirtmakers in 1982 and has been providing in-office and at-home custom tailoring ever since.

At the recent kick-off for the Society for the Performing Arts "Mad Men of SPA" gala, Jones chose a fitted, navy and gold mini-stripe Super 150's wool suit. His shirt a royal oxford with French-cuffs. Both from his company. Dressing up the ensemble, Jones added a plaid tie in blues and gold that he found while vacationing in Como, Italy; a blue and gold vintage pocket square; black suede gold horsebit shoes by Gucci; and a black alligator belt from Neiman Marcus.

No gentleman's outfit would be complete without the appropriate time piece and Jones wore a gold, ribbed strap tank watch by Boucheron. Gold and sapphire ribbed cufflinks by Albert Lipten of New York and a gold family crest ring completed his accessories. What could be more fitting for a party held in the men's department of Neiman Marcus where sartorial splendor is paramount?

"I chose my attire," he explained, "after considering the dapper early 1960's era of the Mad Men TV series and the creative attention to detail that went into proper dress by businessmen in that period."