Bowl Season's Crucial
Baylor's Robert Griffin III may have won the Heisman, but he's not forcing Mack Brown into retirement 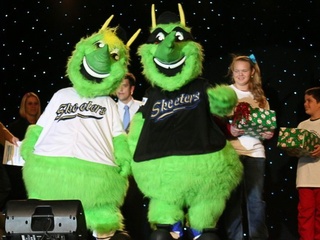 Though Sugar Land's minor league baseball team won't start its first season until late April 2012, the Skeeters have already chosen the names for the mascots. Say hello to Swatson and Moe!

The fuzzy, neon green, big-hipped mosquito mascots were created by Raymond Entertainment Group and named by children of Fort Bend County in a "Name Your Mascot" contest presented by Kids 'R' Kids. The winners of the competition were 9-year-old Nathan Johnston (his choice was Swatson) and 11-year-old Kaysie Faas (she chose Moe).

For their prize, both Johnston and Faas will serve as co-presidents of the Skeeters Buzz Brigade (the team's young fans group) for the 2012 season, plus they will receive honorary membership in the Buzz Brigade and four tickets to the opening game against the York Revolution in April.

Get to know this creative EaDo bakery, plus Montrose's hottest new bar
Tapping in to a crafty Houston brewery, plus dining out in River Oaks
A Goode chat with restaurant royalty, plus a tasty Houston's tribute