After arrest for shoplifting, Cowboy player gets endorsement deal 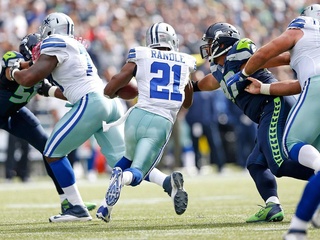 Joseph Randle remained on the Cowboys' active roster despite his arrest. Photo courtesy of Dallas Cowboys

Randle, 22, was arrested for shoplifting October 13. Photo via Frisco PD

Suffice it to say that Dallas Cowboy running back Joseph Randle has had an eventful — albeit unusual — week.

First, the second-year player out of Oklahoma State ran for 52 yards in Dallas' upset victory in Seattle. Just 24 hours later, he was arrested for shoplifting cologne and underwear at Dillard's in Frisco. But the story didn't end there.

As part of the deal, Randle will donate more than $15,000 worth of underwear and clothes to Dallas children.

Before the week was over, Randle landed an endorsement deal with MeUndies, which was not the brand of underwear that he is accused of swiping.

In a tweet announcing the partnership with Randle, the California-based underwear company said "every mistake is a learning opportunity."

"Randle would like to take full responsibility for his actions," the statement reads in part. "He saw this partnership as an opportunity to turn a negative situation into a positive."

As part of the deal, MeUndies and Randle will donate more than $15,000 worth of underwear and clothes to Dallas children.

Meanwhile, the Cowboys fined Randle an undisclosed amount for his underwear indiscretion but kept him on the active roster. He ran for seven yards in Dallas' win over New York on Sunday.

Joseph Randle remained on the Cowboys' active roster despite his arrest. Photo courtesy of Dallas Cowboys