Beyond the Boxscore
Bud Norris is gone! Smartest team in MLB drops to $13 million payroll

Adam Wexler (left) and Matt Jackson had been on the air at 790 since December 2009. SportsTalk790.com 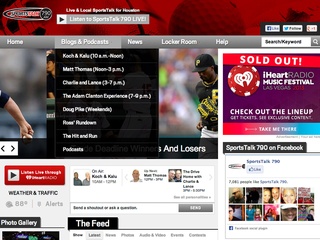 All evidence of the show is conspicuously absent from the SportsTalk 790 homepage. SportsTalk790.com

All references to the show were removed from the station's homepage after the duo did their usual show Thursday morning. Jackson and Wexler's morning show placed third among local sports stations in the most recent Arbitron ratings book, capturing 1.3 percent of the audience in sports talk radio's critical men aged 25-54 demographic.

Jackson and Wexler's show placed third in the most recent ratings book, capturing 1.3 percent of the audience in sports radio's key demographic.

That's behind the 2.3 percent captured by national show Mike & Mike In The Morning on ESPN 97.5 (KFNC) and the 1.6 percent captured by SportsRadio 610 (KILT) and its high-profile, well-compensated morning team of Nick Wright and John Lopez. A source close to the situation thinks that the decision was a pure cost cutting move, and speculates that 790 AM afternoon co-host Lance Zierlein will end his stint alongside Charlie Pallilo and return to morning radio.

CultureMap reached out to Jackson, but he declined comment through a second party. CultureMap also contacted Clear Channel Houston (which runs 790 AM) but management officials did not immediately answer a request for comment.

Adam Wexler (left) and Matt Jackson had been on the air at 790 since December 2009. SportsTalk790.com