Linsanity Out & About
How Jeremy Lin spent his first night in Houston: Wows staff at local hot spot with surprise visit

Six Houston Olympians to keep an eye on in London

Six Houston Olympians to keep an eye on in London 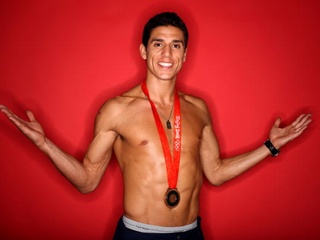 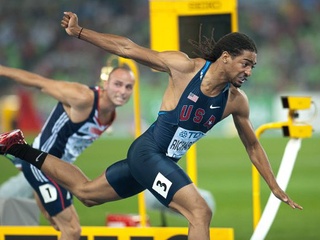 With the Olympic Games underway, it's time to pick your favorites. We're all cheering for the big names — Michael Phelps, Ryan Lochte, Missy Franklin, Natalie Coughlin — but lets put some hometown pride in our Olympic pom poms this year. Out of the 10,490 elite athletes headed to London, here are six from Houston (or with close Bayou City ties) who I'm going to cheer loudly for.

This Pasadena native was the first American female boxer to qualify for the Games as women's boxing makes its long awaited debut in London. At 5-feet-3-inches and weighing 112 pounds, this flyweight can pack a punch. Literally. In a sport not highly touted for its beauty, Esparza brings a new light to everything we once knew about boxing. As the new face for CoverGirl, her ambitions will take her well beyond the ring in London.

In a sport not highly touted for its beauty, Esparza brings a new light to everything we once knew about boxing.

Esparza's top two goals both in and out of the ring are to make the first women's Olympic boxing team (check) and to graduate college. She was student body president at Pasadena High School and graduated in the top 2 percent of her class.

Esparza, who came to love boxing thanks to her father's love of the sport, is now trying to show the world she, too, can fight. In a Los Angeles Times article she admits, "I got into a lot of street fights. Once after school I beat a guy up. My big brother was always getting into fights. So I'd jump in and help him," she said.

Even Vogue Magazine has tabbed Esparza "America's best hope for the gold" in its July issue.

Esparza turns 23 today —just two days after the opening ceremony — and I can't think of a better present than an Olympic gold medal, can you?

I had the opportunity to chat with Horton just days before heading to London and became an instant fan. This will be his second time heading to the Olympics; four years ago in Beijing he won a silver medal in the high bar routine as well as a team bronze medal.

When asked where his motivation comes from, Horton had a pretty standard answer: "From within. I set my goals and go after them," he said. "I visualize being an Olympic champion — standing on the podium with my teammates and that's what motivates me."

Horton's best event, the rings, is ironically his least favorite. "It takes a lot of strength and is a tough routine to get through," he admitted.

Horton, who at 26 is six years older than the next oldest guy on the U.S. team, feels he's much more mentally prepared this year compared to 2008. "Everyone knows how big the Olympics are. When I got off the plane in Beijing, it hit me — all the hype, the pressure. But this year I know what to expect. I feel I'm more prepared, a better gymnast and more technically sound," he said.

"A lot of people are expecting me to retire [after these games], but I told my wife, as long as I can contribute to Team USA, I might as well stick around. After the London Games, I'll reevaluate," Horton said.

Trying for his fourth medal, this Sugar Land native comes from a family of Olympic athletes, all in Taekwondo. His brother Mark, who won silver at Beijing, did not qualify this year, but his younger sister, Diana, did (see below). According to USA Today, "Only South Korea and Taiwan have more Olympic Taekwondo medals than the Lopez family."

According to USA Today, "Only South Korea and Taiwan have more Olympic Taekwondo medals than the Lopez family."

In Beijing, the Lopezes became the first set of three siblings to compete on the same Olympic team in the same sport since 1904 and all three came away with medals. (Can you imagine the roughhousing that went on at the Lopez house? As an only child, I certainly cannot!)

Steven, who was included in People Magazine's 50 Most Beautiful People, is the only member of the Lopez family to have won gold (doing so twice). He was 21 when Taekwondo made its Olympic debut in 2000 in Athens, where he took gold in the welterweight division. He has gold medals from the 2000 and 2004 Games and a bronze from 2008.

He heads to London looking for redemption after a controversial loss in Beijing. He was defeated after a bad call, which the World Taekwondo Federation later acknowledged as an "unintentional judgment error." At  33, he is back and better than ever after putting in long hours to get not ready — physically and mentally.

The youngest in the Lopez family, Diana has taken gold in the Taekwondo Junior Nationals for 10 years in a row and is looking to snag a gold medal at the London Games. When she won the gold at the World Championships in 2005, she made the Lopezes the first three siblings in any sport to win World Championship titles at the same event.

Diana claims in an espnW article that she followed her brothers into the ring so she wouldn't be left out.

Currently in her last semester at the University of Houston, where she studies childhood education, the 28-year-old who goes by "DLo" has put her studies on hold until London is over. Here's hoping she returns to classes with a gold medal around her neck.

In her first Olympics (Beijing 2008), Loukas finished ninth in 3-meter springboard and contemplated retiring after her subpar perfomance. Lucky for us, she thought better of it and is now off to London to try and earn a gold.

Currently a resident of The Woodlands, but originally from Chicago, Loukas, 26, will be competing in the 3-meter springboard. (She and her partner, Kassidy Cook, barely missed qualifying in synchronized diving by less than one point.)

Less than two years ago, Loukas decided to give diving another chance and is now headed to London with a refreshed attitude and a renewed spirit, happy and thankful to have another shot at the Olympic stage.

London marks this track and field star's Olympic debut. Richardson, who was born in Houston and raised in Cedar Hill, has high hopes of snagging the gold in the mens 110m hurdles, where he is the reigning world champion in the event (he initially won silver but winner Cuba's Dayron Robles was disqualified for impeding another hurdler).

In the Olympic trials semifinals in Eugene last month, he ran an impressive 12.98 seconds - becoming only the 13th man to break the 13-second barrier in the hurdles.

Richardson, 26, may have the best "what I want to do when I grow up" line as quoted on NBCOlympics.com saying, "I would like to amass wealth and prestige and invest well [enough] that I could sit up in the house and eat Skittles until I figure out what else moves me in life."

Richardson, who studied sports entertainment management at the University of South Carolina, where he also, obviously, ran track, is eagerly awaiting his chance to show the world that his event may just be the best in all of track and field. A guy after my own heart, Richardson plans to handle the pressure with his "no-filter personality" and by making as many jokes as possible as he recently told a Vanity Fair reporter.