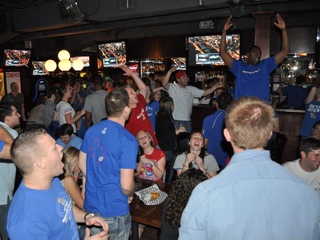 A full crowd at Coaches Pub in Midtown for the Final Four game does the traditional University of Kansas chants.  Courtesy of KU Alumni Houston Chapter

Houston may not be in Kansas, but step into Coaches Pub in Midtown on any given game night and you may be surprised. On Monday night — the night of the national championship game between Kansas and Kentucky — you'll be overwhelmed.

Coaches has been deemed the official watch bar for the University of Kansas Alumni Association's Houston Chapter; a dedicated place where die-hard Jayhawks fans can meet up, make friends and — most importantly — watch basketball.

McNeal watches nearly every game at Coaches alongside alumni ranging from recent graduates to 65-year-old veterans.

"I really didn't expect them to get this far, since they lost a whole lot [of players] from the team last year," Pugh said.

During the regular season, the crowd at Coaches is comprised of about 50 regulars who celebrate in much the same way as fans do inside of Allen Fieldhouse back in Lawrence — decked out in red and blue, chanting, cheering and "waving the wheat."

"No one really expected this," McNeal said of the Jayhawks run to the Final Four. Though Kansas won the championship against Memphis (and current Kentucky coach John Calipari) in 2008, most fans thought that this year's squad was still a "developing team."

So thought Dr. T.J. Pugh, assistant professor of radiation oncology at the University of Texas MD Anderson Cancer Center, who played forward for Kansas in four NCAA Tournaments (1995 through 1999).

"I really didn't expect them to get this far, since they lost a whole lot [of players] from the team last year," Pugh said. "But I know the Jayhawk team culture, and I'm sure they fully expected to win the conference and do well in the tournament.

"They probably didn't think they'd be competing for the championship tonight, though."

As the Jayhawks have advanced in the bracket, watch party attendance has grown. Houston Rockets forward Marcus Morris — the star of last year's much more hyped Jayhawks team that lost in the Elite Eight to underdog VCU — stopped by Coaches for the Sweet 16 game against North Carolina.

This past Saturday, for the comeback semifinal win over Ohio State, Houston's resident Jayhawks came out of the woodwork to support their alma mater. The crowd was standing-room-only, shoulder-to-shoulder.

When the national championship tips at 8:23 p.m. Monday, you can expect more of the same.

A full crowd at Coaches Pub in Midtown for the Final Four game does the traditional University of Kansas chants.  Courtesy of KU Alumni Houston Chapter