Johnny Manziel lashes out on Twitter about Longhorn tattoo

Johnny Manziel says the Longhorn tattoo on his left rib is fake.  bustedcoverage.com 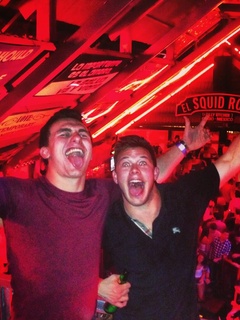 By all accounts, Johnny Manziel lives a pretty charmed life. When he's not tearing up the football field and winning the Heisman Trophy, he knows how to kick back and blow off some steam.

But with great talent comes great scrutiny, and Johnny Football has as many fans as critics. Manziel is currently relaxing in Cabo San Lucas for spring break, and he's not exactly camera shy with his exploits.

Manziel went on to say the ink cost 150 pesos, meaning that although the photo may be real, the temporary tattoo won't last more than a couple of months.

Someone caused a stir on March 12 by posting a photo of Manziel with a Longhorn tattoo on his left rib. This would qualify as blasphemy for the Texas A&M quarterback, though he admits he was a Longhorn fan growing up in Kerrville.

Manziel debunked the photo with a two-word tweet: FAKE tattoo. He later went on to say the ink cost 150 pesos, meaning that although the photo may be real, the temporary tattoo won't last more than a couple of months.

But when a portion of his 325,647 Twitter followers responded to his henna publicity stunt with less than glowing acceptance, Manziel fired back. Suffice it to say the Twittersphere hit a nerve when it called Johnny Football fake.

Johnny Manziel says the Longhorn tattoo on his left rib is fake.  bustedcoverage.com