The Year in Culture
Ka-ching! The return of million dollar fundraisers made for a bountiful year
LATEST NEWS
Star chef-owner reveals what's next for Houston's hottest restaurant
Shelby's Social Diary

Regis, the Clintons, Joe Torre and more beat the blizzard for the Tyrell/Pulaski vows in NYC

Regis, the Clintons, Joe Torre and more beat the blizzard for the Tyrell/Pulaski vows in NYC

A little wedding fun in the New York City blizzard for Steve Tyrell and Karen Pulaski, who were married on Christmas. Photo by Steven Brahms 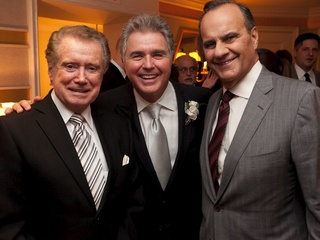 While the monster blizzard in New York City prevented a handful of Houstonians from attending, the turnout was stellar when singer Steve Tyrell and interior designer Karen Pulaski took their vows at The Carlyle on Christmas evening.

For starters, former President Bill Clinton and Secretary of State Hillary Clinton, who had popped in for Tyrell's show at Cafe Carlyle a few nights earlier, made a surprise visit to the wedding.

Not only did a number of special guests trudge through the blowing snow but also Chris Gillespie and Tony DeSare of the Carlyle's Bemelmens Bar made it in to provide Cafe Carlyle-style musical entertainment for the wedding party. At the end of the evening, Tyrell joined in for an impromptu jam session with the musicians. Singing his heart out, we're sure.

Tyrell will be finishing his sixth holiday season at the famous Cafe Carlyle with his annual New Year's Eve performance. You might recall that he took over at the piano after the death of the legendary Bobby Short in 2005.

A little wedding fun in the New York City blizzard for Steve Tyrell and Karen Pulaski, who were married on Christmas. Photo by Steven Brahms