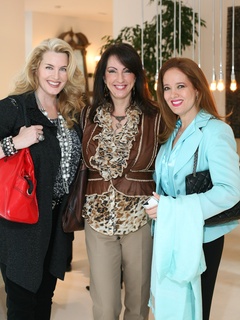 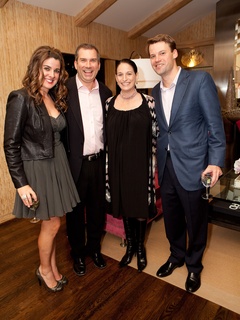 Houghtaling, who opened a Houston office of Gauthier, Houghtaling & Williams two years ago, said that he was actually surprised at the turnout. "It's a testament to the fact that Houstonians look at what's happening in the Gulf and know that it will affect them." In fact, the Gulf of Mexico oil spill disaster, Washington's reaction and the Louisiana economy were the subjects of Jindal's remarks as well as a few mentions of his just-published book, Leadership and Crisis. No hint of a national campaign in his words. Houghtaling commented that Louisiana needs Jindal more at this moment than the nation.

(Houghtaling co-founded Ocean Therapy Solutions with Kevin Costner last summer in an effort to stem the damages from the Deepwater Horizon spill.)

The event raised $100,000 for the governor's campaign with only three weeks in the planning.  Applause, applause for Jody Probe, Houghtaling's fundraising organizer, who put the reception together so successfully with such a short fuse.

Among those turning out to hear the governor was Fred Zeidman, a Jindal supporter and fundraiser for 10 years. His son, Jay Zeidman, was one of several young professionals hosting a $30 a head fundraiser for Jindal later Thursday night at Cork Soakers Wine Bar.

Nearly a dozen Houston area notables were in New York for the national launch of No Labels, a non-party place for centrists of all parties, that received its first breath of fresh air here in Houston. Starting things off with a No Labels fundraiser in the posh Park Avenue residence of Ann and Andrew Tisch were litigation lawyer Dan Cartwright and wife Dawn Nelson-Cartwright and attorneys Scott Atlas and Mark Yzaguirre.

Charitable giving is breaking out all over the city as the social engine steams toward Christmas. The Children's Assessment Center, for example, took over the contemporary abode of Lucinda and Javier Loya for its annual holiday coffee, which resulted in the collection of a load of toys and gift cards for CAC's youthful clients.

A member of the CAC Friends Guild board, Lucinda decked her halls and made jolly for guild members that included Anne Carl, Ericka Bagwell, Maria Bush, Deborah Duncan and Kim Moody. Also on hand were Kimberly DeLape and Alicia Smith, who join forces as chairs of the April 1 Spirit of Spring luncheon and fashion show at the Omni Houston Hotel.

Mixing it up with the ladies were a sprinkling of gents including Terry Wayne Jones, Stephen C. Lewis and Christopher Mendel, clearly loving the crowd of fab femmes such as Amy Lee, Stephanie Perkins, Elizabeth Petersen, Susan Plank, Megan Sutton-Reed, Phyllis Williams and Rachel Regan.

Handbag and footwear designer Elaine Turner opened her mid-century modern home for a holiday spree that encouraged guests to bring Christmas gifts for youngsters affected by cancer. Heroes for Children was the beneficiary of the toys and greenbacks fundraiser that included a silent auction for all manner of goodies ranging from a "shoes for all seasons" package of five pair of Elaine Turner shoes  to dinner for 20 at Carraba's.

That would be trial lawyer John Eddie Williams and wife Sheridan, who attended Vice President Joe Biden's annual Christmas party on Tuesday night and then were part of the festive mix at the White House Wednesday night for President Barack Obama's holiday soirée.

It was wheels down in Houston only briefly for the duo before they jetted over to Lake Charles on Thursday to take in Tony Bennett's concert at L'auberge du lac Casino Resort. You might have caught a glimpse of the couple on Larry King Live, his last night on the air. They were spotted in the Tony Bennett audience when the crooner sang a special tune for King.

Judy Elias celebrating her birthday over dinner at the bar in Tony's where she was joined by hubby John Elias, Judy and Rodney Margolis and other friends while Patsy and Greg Fourticq warmed it up with Simone and Dr. Sam Weber, Dr. Randy Weber and Barbara and Dr. Norman Frankel . . .

Karen and Mark Johnson having a post-party dinner with Karen and Mike Mayell at Bar Annie where the packed house included Susanne Byram, in from Austin, dining with Sally Salners, Debbie and Vidal Martinez grabbing a quick bite and Franco Valobra entertaining a table friends . . .