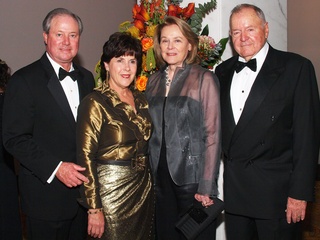 Welch Foundation president Norbert Dittrich and wife Rebecca, from left, visited with Mary Ann Rankin, dean of the College of Natural Sciences at the University of Texas in Austin. Photo by Kaye Marvins

Basic research in chemistry — it just doesn't have much sex appeal. But what it does have are the keys to certain aspects of our future, which is why the Houston-based Welch Foundation, each year, presents the Welch Award in Chemistry to talented researchers.

The honors went to JoAnne Stubbe of MIT and Christopher T. Walsh of Harvard Medical School at a black-tie dinner held earlier this week at the Hilton Post Oak. More than 300 scientific, academic and civic leaders gathered to salute the work of these brilliant scientists.

Their studies, according to the Welch Foundation website, "helped explain how enzymes, proteins that act as catalysts to speed up reactions millions-fold, have evolved to carry out difficult and ingenious chemistry critical to life. Their basic research has laid the groundwork for therapeutic advances in medicine, particularly the treatment of cancer."