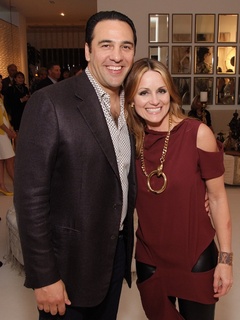 Javier and Lucinda Loya celebrated the birthdays with three special events in New York and the partygoers are still gasping for their breath. Photo by David Postma/Genesis Photographers

Friends of Lucinda and Javier Loya are still recovering from that couple's mutual birthday fete this past weekend in New York. Two days, three events and 60 Houstonians added up to a fabu birthday celebration.

The Loyas have a second home in New York, where a number of his partners in Choice Energy are based. So what better place to celebrate their non-milestone b'days that are only three weeks apart?

Last fall, Lucinda and her design team at Lucinda Loya Interiors began planning three special events complete with the 13x13 hand-delivered Lucite invitation featuring an antique map of Manhattan with the party locales enlarged. First stop Friday night was the exclusive La Esquina, the authentic Mexican restaurant that looks like a taco stand from the street. Imagine the looks on the faces of Christy and Lou Cushman and Kara and Ray Childress when their Town Cars pulled up. The Loyas had reserved the private room in the basement ("It has the ambience of a jail cell," Lucinda said) for a buffet dinner.

Things took a more sublime course on Saturday when everyone gathered at the Loyas' Gramercy Park apartment (a former church) where they split up — girls on a disco bus for a shopping expedition to all of Lucinda's favorite funky boutiques, guys following Javier to Club Macanudo for lunch with "the Donald." Well, not the real Donald Trump but a very convincing impersonator, who with the help of Javier, had a bit of a roast of all the guys in the room.

While those adventures ended at 5 p.m., the group was back at the Loyas' by 7:30 for a seated dinner with New York friends, bringing the total guest count to slightly more than 100. Ursaline Hamilton and Dr. Toby Hamilton (not related), Liz and Tom Glanville and Stephanie and Bill Perkins were among those helping the Loyas blow out the candles.

For late-night dancing, the Loyas took over Cibar Lounge, two blocks from their apartment. The hot DJ spun the CDs until the wee morning hours. To keep the party going, the Loyas had pizza delivered at midnight. And the goodie bags picked up on the way out contained bagles, bottled water and Tylenol.

The famed South Texas King Ranch plans on making a big splash at the Houston Livestock Show and Rodeo with a 2,000 square-foot cottage in the shopping arcade at Reliant Center and they're filling it with goodies from the King Ranch Saddle Shop.

In celebration of that HLS&R debut, the Saddle Shop invited a few friends over to the private room at Armandos to check out samples of the boots, leather satchels, jewelry and other clothing that will be on display in the King Ranch boutique. Former President George H.W. Bush was spotted in the crowd visiting with King Ranch execs including CEO Robert J. Underbrink and wife Laura and King Ranch CFO Bill Gardiner.

Among guests were Paula and Butch Robinson, HLS&R executive committee member and immediate past president.

Though they are twins, Jeff Fuller, director of recruitment at the University of Houston, and Jason Fuller, Sen. Kay Bailey Hutchison's regional director, celebrated their birthdays at two different parties over the weekend. Jason and Cindy Clifford hosted a party for Jeff at Jason's Beaconsfield apartment. Among the 40 guests were folks from academia as well as members of the Fuller family.

The big bash came on Sunday, when Cindy hosted a birthday shindig for Jason in the Memorial swankienda of Parvin and Marty McVey. As many as 70 well-wishers poured in to eat, drink, be merry and dance to the Motown sounds of DJ Gosey. This party was supposed to end at 9 but the guests kept the birthday candles shining until 11, on a school night, no less.

Javier and Lucinda Loya celebrated the birthdays with three special events in New York and the partygoers are still gasping for their breath. Photo by David Postma/Genesis Photographers