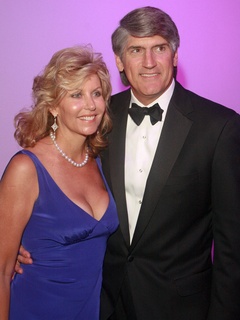 Susan and Michael Plank, among key Houston investors in "Black Swan," are ready for the Oscars. Photo by Gary Fountain 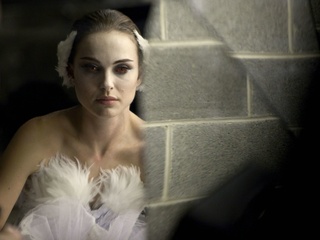 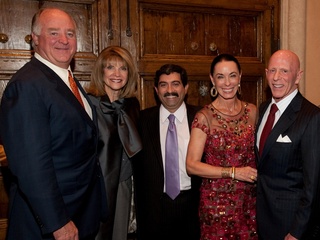 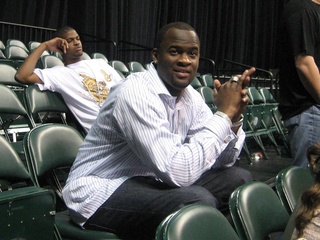 Vince Young checked out Benjy's in advance of doing his own restaurant/bar thing in Austin. 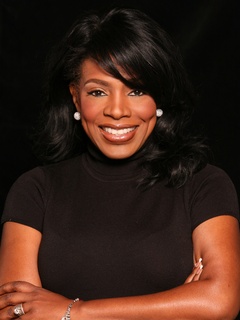 It was frosted tequila toasts for all their friends when Susan and Mike Plank raised their glasses Sunday night in celebration of Natalie Portman’s slam dunk win as Best Actress at the Golden Globes.

The Planks are among key investors in Cross Creek Pictures, which footed the bill for the dark psychological thriller that has garnered gallons of ink and beaucoup webspace. When the curtain went up on the Golden Globes, the Planks were joined at home by co-investors Laurie and Tracy Krohn and Suzanne and Bill O’Donnell and several close friends.

The otherwise quiet evening began with a little lasagne and Caesar salad dinner, whipped up by Susan, and then continued upstairs at the Planks' Hedwig Village swankienda in the "adult playroom," as Mike describes it. With eyes on the flat-screen TV, the film buffs challenged one another to a few rounds of pool and table shuffleboard until the moment came, late in the evening, for Natalie Portman.

Following the first tequila toast to the Black Swan win, the celebrants raised their glasses again — the second time in hopes of Academy Award nominations and wins. (Just in case, Susan has already selected her dress for that big night in Los Angeles — a smashing Kaufman Franco.)

With investors in Houston and Louisiana, Cross Creek Pictures is poised for more excitement with three films on tap. Shooting wrapped in London last month on The Woman in Black, starring Daniel Radcliffe, aka Harry Potter.

But even more tantalizing, particularly for the females in the partnership, is The Ides of March, which begins filming in February. That political drama stars the dreamy George Clooney, who is also directing. It's a rich cast that includes Paul Giamatti, who took home a Golden Globe on Sunday, plus Ryan Gossling, Philip Seymour Hoffman and Marisa Tomei.

And coming down the pike is Black Mass, a story of the Irish mob on the East Coast. Mike quips that there is something dark about the word "black" in the title of three of their films.

Who knew that Lester Smith has a near-addiction to doughnuts? Sharing that insight was just part of the fun at Lester and Sue Smith's Memorial-area home when they hosted the cocktail reception honoring chairs and underwriters of the American Heart Association's Heart Ball.

The swank gathering of 125 Heart Ball supporters began with cocktails and light bites on the ground floor of the expansive home then moved up to the second-floor ballroom for remarks, the doughnut revelation and a spin around the dance floor by the beyond-talented Smiths.

Something in the air

Word on the street is that Julia Frankel, Rosemary Schatzman, Sheridan Williams, Melissa Mithoff, Elizabeth Petersen, Kelli Blanton and Gracie Cavnar all have something in common to celebrate. Confirmation on that tomorrow.

Tennessee Titan and hometown talent Vince Young sampling the menu at Benjy's on Washington with a group of friends. The popular quarterback ordered rounds of Patron margaritas for a group of gals, who were likewise sending him cocktails and shots. We hear that Young was doing a little restaurant research, visiting various hot spots in H-town in advance of opening a restaurant/bar in Austin . . .

Barbara and George H.W. Bush lunching at a table for two at La Griglia where that night Fred Zeidman, Eduardo Aguirre and Eric Andell chewed over dinner and their tenures in D.C. during 43's years in office . . .

Susan and Michael Plank, among key Houston investors in "Black Swan," are ready for the Oscars. Photo by Gary Fountain

Vince Young checked out Benjy's in advance of doing his own restaurant/bar thing in Austin.