Zimmern and Bun B showing Texans pride. Photo by Trillog/Instagram

Racks of buffalo ready for the smoker. Photo by Chris Shepherd/Lockerz 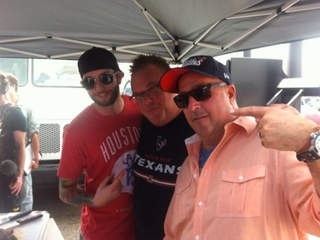 For foodies, the most prized seat at Texans games isn't a luxury box or a field-level spot on the 50-yard line. It's a spot in the Blue Lot for one of chef Chris Shepherd's epic tailgates.

Shepherd is such a devoted football fan that he says football is the number one reason that his restaurant, Underbelly, is closed on Sundays.

"It's the same group of guys that get together every week," Shepherd told Amber Ambrose last month. "There's probably anywhere from 20 to 50 of us; it's not a big tailgate, but it's just done right. It's some of my old guys that worked with us (at Catalan), front-of-the-house guys, wine guys, it's customers, it's a lot of Catalan and Underbelly people."

For Sunday's game against the Buffalo Bills, Shepherd was joined by some special guests: Andrew Zimmern, host of The Travel Channel's Bizarre Foods, and Houston rap legend Bun B.

Zimmern had his camera crew on hand as Shepherd and his crew smoked buffalo (obviously) from Revival Market, plus pulled pork, wings and other tailgate essentials. With a feast like this, a red-hot 7-1 Texans team is just a bonus.

Chris Shepherd summed it up pretty well on Twitter:

Good to hang out with a new friend @andrewzimmern today in the blue lot! We most defiantly were #winningthetailgate

Zimmern and Bun B showing Texans pride. Photo by Trillog/Instagram

Racks of buffalo ready for the smoker. Photo by Chris Shepherd/Lockerz