The CultureMap Interview
Elouise Adams Jones dishes on her new Bird & The Bear restaurant: From late-night tapas to all that red
LATEST NEWS
Here are the top 10 things to do in Houston this weekend
Hometown Glory 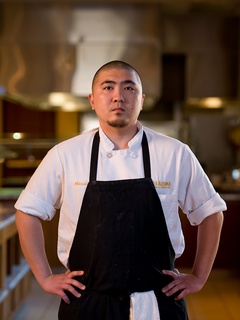 The final round of the Chefs Under Fire competition rolled out the red carpet in Austin Sunday night for some of Texas’ most esteemed culinary connoisseurs. Guests ate tasty morsels and drank local wines as they mingled with emcees Devon Broglie (Master Sommelier and wine buyer for Whole Foods Market) and Garrett Weber-Gale (U.S. Olympian swimmer and co-founder of AthleticFoodie), as well as celebrity judges chef David Bull of Congress, chef Tyson Cole of Uchi and Uchiko and chef Kent Rathbun of Abacus.

Despite the immense pressure, the competitors — Kevin Martinez of the Toyko Cafe in Forth Worth, Daniel Valenzuela of the Escoffier School of Culinary Arts in Austin and Harold Wong of Houston's downtown Azuma — all appeared cool and collected while spectators watched them prepare their dishes in only 30 minutes.

Chefs were given a list of mandatory secret ingredients, including ground longhorn beef, Idaho potatoes, green onion and red beets — the perfect ingredients for a Texas-themed competition. Because the judges were selecting a winner based on taste, presentation and originality, the competitors had to come up with something far more creative than just a hamburger and fries.

Midway through the competition, gears switched and guests were lead to their tables in the AT&T Executive Education & Conference Center. Each table was greeted with a variety of amazing wines handpicked by sommelier and emcee Devon Broglie, as well as tasty cheeses from Houston Dairymaids and meats accompanied with unique mustards from The Grateful Bread & Other Good Things.

Rather than an intense competition, it felt more like a gastronomic community gathering to show support to those whom shared the same common interest: Good food. Ticket holders had traveled from all over Texas and were encouraging to all the competitors. But the sense of community was also extended to fans over the web, as audience members were told to tweet during the competition to see their thoughts displayed on the Chefs Under Fire Twitter page as well as on a large screen by the stage.

As we sampled each of the competitors’ dishes, it was apparent that the finalists had not only incredible talent, but drive and imagination. We were relieved not to be judging.

After much deliberation, the judges came back to the stage and announced their winner: Houston's own Wong. For the win, Wong gets a seven-night stay for four guests in Cabo.

His winning dish, “Only in Texas," included leaf longhorn pattie paired with sautéed mushrooms and accompanied with Idaho chips, fried kale, compressed infused strawberries and a bit of black berry mash. It was garnished with ito togarashi, green onions and fried leeks, served on a streak of spicy beet purée.

Fans and audience members also had a say in the competition and were able to vote for their favorite dish via text. The fan favorite was Valenzuela, who was representing Austin/San Antonio. His dish was Idaho potato and green onion purée, green chile longhorn ground beef cake with red beet, and chipotle gastrique.