Foodie News
A cupcake drive-thru cafe? Believe it — The Woodlands is upping the sweets insanity 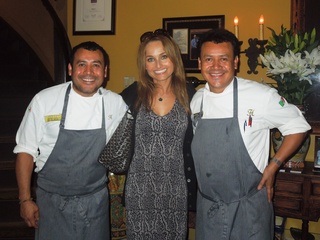 While Food Network darling Giada de Laurentiis and master chef Jacques Pépin might have wowed the crowds at the weekend's Metropolitan Cooking & Entertaining Show, they were deliciously impressed themselves with the spreads they feasted on at Hugo's.

She even posted a photo of the dish. So impressed, de Laurentiis praised the Chile Relleno at one of her on-stage demonstrations at Reliant Center on Saturday.

In celebration of the close of the successful event, show founders Denise and Bill Medved hosted Pépin to a Hugo's feast, many of the dishes served by chef Hugo Ortega.

Joining the Medveds and Pépin in a margarita toasting the show's conclusion were Victoria Jordan of the James Beard House/James Beard Foundation, Pépin's daughter Claudine, and Martie Duncan, runner-up on this season of the Food Network’s Next Food Network Star.