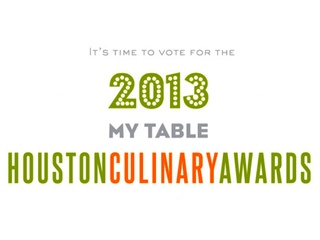 What's the best Houston restaurant of all?

My Table magazine has announced the full list of nominees for this year's Houston Culinary Awards. Readers are invited to vote in 25 categories that cover everything from Chef of the Year to Best Mom and Pop Ethnic restaurant.

In almost every instance, the committee of sponsors' representatives and food writers have given voters the chance to decide between well-established candidates or new up-and-comers. For example, the nominees for Restaurateur of the Year range from the venerable Tony Vallone, whose restaurant Tony's has been among Houston's best for two generations, to The Pass & Provisions's Seth Siegel-Gardner and Terrence Gallivan, who managed to open two separate restaurants in the same building over the course of three months.

The winners will be revealed at an awards banquet on October 6 at the Houstonian hotel. A $150 ticket buys access to the event, where a who's who of Houston chefs will serve dishes. They include Ronnie Killen of Killen's Steakhouse, Kevin Bryant of Eleven XI and Jeff Axline of Hotel ZaZa.

You can vote at the Houston Culinary Awards website.

Work hard and play harder at the Texas A&M's 4-H Center
Plan a getaway to Graham, home of Fort Belknap
Lock up a tour at the Brown County Museum of History in Brownwood