Pix of the Day
Houston chefs on the way to James Beard Awards impress D.C. foodies 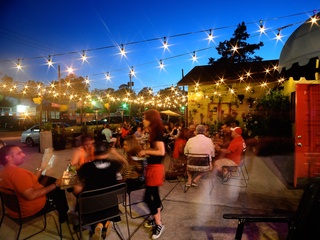 News of Pepper Jack's Mexican Grill and Cantina's recent closure didn't come as much of a shock, especially considering that the landlords were apparently hoping to ride on the coattails of Cabo's former Tex-Mex success.

The next tenants won't make the same mistake. As Eater's Eric Sandler reported over the weekend, El Gran Malo co-owners Steve Sharma and Lea McKinney are planning to open a second location of their popular Heights-area gastro-cantina on the prime downtown corner.

Kevin Naderi of Roost purchased El Gran Malo's Heights building, but McKinney assured CultureMap that they have no plans to close the current location.

This announcement comes just a month after the news that Kevin Naderi, owner and chef at Roost in Montrose, had purchased El Gran Malo's small spot on Ella Boulevard and W. 23rd Street, but McKinney assured CultureMap that they have no plans to close the current location.

"We thought it was going to be a bar," McKinney explained of the infused tequila concept that opened in 2011, until she and Sharma realized that 99 percent of their customer base was coming in to eat.

The downtown real estate is a significant space upgrade — up from approximately 2,000 square feet to 10,000 square feet — and the pair hopes to expand the menu proportionally, adding fajitas, plates of food, seasonal specials, healthy items from the grill and more.

Sharma told Eater that he used to be a regular at Cabo, which had a long, successful run in the space at the corner of Travis and Prairie, and that he's looking forward to "bring a proper happy hour back to downtown." El Gran Malo will be joining a phalanx of other locally-grown, independently-owned concepts in the Market Square Park area.

The restaurant will require "minor decor changes" before reopening in late summer or early fall. It won't be long before downtown denizens will be able to enjoy tacos for lunch, after-work infused tequila flights and weekend dining.