The bar is going through a rebuilt that's bringing a distinctive new interior. Courtesy of Amir Ansari

The Eighteenth Bar harkens back to speakeasy times. Courtesy of Amir Ansari 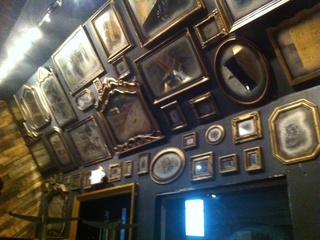 The lot at 2511 Bissonnet has become something of a nightclub graveyard. After short recent stints as a replacement Gallant Knight and then as Antique Bar, the venue has been under construction for several months for another metamorphosis.

It's set to reopen this month as The Eighteenth Bar, a concept spearheaded by Erick and Frank Ramirez — the father-and-son duo behind Hughes Hangar — and former Antique/Vintage managers Amir and Davar Ansari.

The speakeasy theme will go so far as to have a Chicago-style back-door entrance complete with revolving passwords.

The Hughes Hangar influence is already evident in the new interiors, which rely heavily on reclaimed wood and the same kind of organized, deliberate wall clutter that makes Hughes so distinctive. The 1920s speakeasy vibe (the bar is named for the 18th Amendment establishing prohibition) will also include offerings from a small kitchen, giving the space a new, more lounge-y feel.

"We're focusing on classic cocktails, craft beer and boutique wines," Erick Ramirez tells CultureMap, saying the speakeasy theme will go so far as to have a Chicago-style back-door entrance complete with revolving passwords. "It's really thematic. It takes you back to another era when you walk in, to a time of bootleggers and rum runners."

Also of note is the 23-and-up door policy, which might be a welcome change for many patrons but is certainly a concept we've seen fizzle at other venues, like Washington Avenue's Roosevelt.

And although the partners insist they're out for a purely Houston vibe, the interiors have some West Coast cred: They were designed by Gino Vian, who also designed Edison in Los Angeles and several homes and venues here in Houston.

Amir Ansari says that for his part Eighteenth will continue a longtime commitment of hosting charity functions like the Candlelighters Margarita Taste-Off, which has been held at Ansari venues for years.

Eighteenth Bar will be open from 4 p.m. to 2 a.m. Tuesday through Friday and from 8 p.m. to 2 a.m. Saturday. Soft opening is still two to three weeks out, with a grand opening to follow.

The bar is going through a rebuilt that's bringing a distinctive new interior. Courtesy of Amir Ansari

The Eighteenth Bar harkens back to speakeasy times. Courtesy of Amir Ansari

Work hard and play harder at the Texas A&M's 4-H Center
Plan a getaway to Graham, home of Fort Belknap
Lock up a tour at the Brown County Museum of History in Brownwood