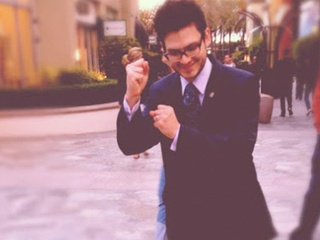 Travis Hinkle, shown in 2012 photo, has left The Pass & Provisions to become beverage director of the Treadsack Group. Google Plus

Foreign Correspondents and Hunky Dory, the twin restaurants that the Treadsack group (Down House, D&T Drive-Inn) plans to open in the Heights later this year, got a little closer to reality this week when former The Pass & Provisions sommelier Travis Hinkle signed on as the group's beverage director.

Hinkle has yet to reveal the move publicly, but he posted a farewell to P&P on Instagram and has updated his Twitter bio to reflect his new position.

Treadsack co-owner Chris Cusack tells CultureMap that Hinkle approached him a couple months ago about joining their team. "He had an interest in working with a group with multiple concepts," Cusack says. In addition to their existing friendship (Hinkle's wife Sara contributes illustrations to Sugar & Rice magazine and the couple regularly eats at Down House), Cusack says that Hinkle's technical skills "to focus on numbers, inventory and margins" makes him a good fit for the role.

Diners eager for previews of either Hunky Dory's modern tavern fare or Foreign Correspondent's Northern Thai cuisine will have a couple of opportunities in the coming weeks to sample each restaurant's food.

Cusack emphasized that Hinkle's leaving P&P on good terms was important to both of them; "I think we did that," Cusack says, by giving sufficient notice to allow the restaurant to prepare for Hinkle's departure.

"I'm excited about the opportunity," Hinkle tells CultureMap. "My role is going to be evolving. I'll work with Chris and the management team, as well as Richard (Knight, chef at Hunky Dory) and PJ (Stoops, chef at Foreign Correspondents) to craft beverage programs that make sense at both restaurants." Hinkle says that he isn't sure yet what directions those program will take, but that it will be "tied to the food."

As construction probably won't begin until May, diners will find Hinkle working the floor at Down House Thursday through Saturday. Cusack thinks Hinkle will be able to expand Down House's wine offerings and also to "do some fun wines" at D&T.

Cusack cites some changes made to the design as the reason initial permits have been pushed back and says the City of Houston "has been pretty decent this time." He credits part of that to the "serious engineering going on" by Austin-based architect Michael Hsu.

Diners eager for previews of either Hunky Dory's modern tavern fare or Foreign Correspondent's Northern Thai cuisine will have a couple of opportunities in the coming weeks to sample each restaurant's food. Hunky Dory chefs Knight and Benjy Mason will celebrate spring onions with a lunch at Knopp Branch Farm on April 6. Tickets are $40. Stoops will make an appearance at Underbelly's Off The Wall dinner series with chefs from Heights Thai restaurant Asia Market on May 18. The $100 tickets to that event go on sale April 14 (and will sell out immediately).

Travis Hinkle, shown in 2012 photo, has left The Pass & Provisions to become beverage director of the Treadsack Group. Google Plus