TJ Watch
Trader Joe's exterior plans for old Alabama Theatre are approved, but what does that mean for its insides?

Kirton tells CM he'll move in himself
The Ashby high rise returns from the dead, but the developer insists it's no monster
LATEST NEWS
COVID-19 variant possibly resistant to antibodies found at Texas A&M
On the Market

A slice of London near River Oaks? New Winfield Gate townhouses look to be luxury ambassadors

A slice of London near River Oaks? New Winfield Gate townhouses look to be luxury ambassadors 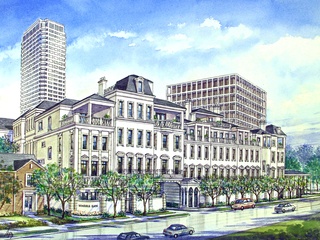 Winfield Gate will begin rising along San Felipe in a few months. Courtesy of Rohe & Wright

The Palladian influences are abundant. Courtesy of Rohe & Wright

Editor's Note: Houston is loaded with must-have houses for sale in all shapes, sizes and price ranges. In this continuing series, CultureMap Editor-at-Large Shelby Hodge snoops through some of our faves and gives you the lowdown on what's hot on the market.

I've changed course with this entry, forgoing a house tour and instead checking out the sales center of this soon-to-be pocket of luxury, nicely situated between River Oaks and Avalon Place. You might have seen in recent weeks the cottages being removed and the land worked on the 2400 block of San Felipe. Well, hold on to your live oaks friends, that stretch of primo real estate is about to change.

Custom luxury home builders Rohe & Wright ( Cheyne Walk, Cáceres) have grand plans for the parcel bordered by Brazoria on the south and Revere and Argonne, east and west respectively.

Imagine a cozy townhouse quarter in London where the architecture reflects Palladian influences. That's what the company has in mind for this development, which is not so coincidentally named after Winfield House, the U.S. Ambassador's residence in London. In fact, each of the 10 floor plans is named after a U.S. ambassador. The Farish, the Harriman and the Annenberg, for example.

Preston Wood & Associates architects has brought the vision to reality — at least in renderings and architectural plans.

The townhomes range from around 3,550 square feet to 5,700 square feet and will stand three to four stories with several plans offering rooftop gardens. At the moment 21 homes are planned for the site but that number could be reduced.

We applaud the plans for the interior landscaping and courtyard with its gushing multi-pronged fountain. The plans promise townhouses overlooking a serene oasis in the heart of urban Houston.

Luxury appears to be the operative word here whether it is in the exterior details such as hand-forged wrought-iron railings and window boxes and gas coach lanterns or in the interiors where SubZero/Wolf and Viking appliances are used in kitchens and where fireplaces, elevators and crown mouldings are standard.

You can check out all of the amenities, specs and allowances if you visit the sales center, which is located in the old Urban Retreat salon, one block east of the site of the new construction.

The builders are promoting the development as the "ultimate lock and go residence" at ground level. Indeed, plans for the gated community include exterior security cameras, state-of-the-art home automation and wiring in each of the homes for six security cameras.

Asking prices: Pre-construction prices range from $1.299 million to $1.999 million and you can expect those numbers to rise as building commences.

Winfield Gate will begin rising along San Felipe in a few months. Courtesy of Rohe & Wright