Go Texans!
Texans fans light up the downtown Houston skyline
LATEST NEWS
Here are the top 10 things to do in Houston this weekend
Mediterranean meets Modern 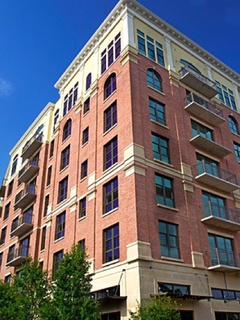 The Belle Meade at River Oaks Photo via Houston Architecture

Following rumors that the Montrose Fiesta's days were numbered — not due to the looming new flagship H-E-B that's just gone up across the street, but at the razing hands of a new developer — Marvy Finger has confirmed that Finger Companies has purchased the shopping center at West Alabama and Dunlavy for a new Mediterranean-inspired development.

Wallace Garcia Wilson has experience building mixed-use properties, as with City Vista, although it's not yet clear whether the development, called Lancaster Place, will contain retail space. Finger declined to give details until the deal is final next week.

The timeline of the project is also unclear, as several tenants maintain long-term leases; Fiesta's lease, for example, runs through 2015.

The Houston Chronicle's Nancy Sarnoff reports that the complex will have 390 units, although renderings have not been made available.