So hot right now
Hold your Fire: Amazon reignites the tablet wars with its iPad killer, but Kindle Fire's not enough

It's Christmastime for Apple fanboys
Which iPhone will it be? Watch an exclusive live blog of the Apple iPhone announcement
LATEST NEWS
Get to know this creative EaDo bakery, plus Montrose's hottest new bar
New World Approach

Tech music: Divisi Strings replaces sheet music with iPads for everything from Gaga to Etta

Tech music: Divisi Strings replaces sheet music with iPads for everything from Gaga to Etta 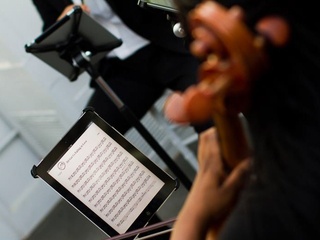 At Rienzi's Punch Party: The 18th Century Imbiber, listeners were intrigued by the string quartet's setup.  Photo by © Michelle Watson/CatchLightGroup.com

Without iPads and music, the additional investmen was upwards of $800.
Courtesy of ArchitypeStudioInc.com

It's the perfect techie-toy for Internet consumption. The iPad is the preferred tablet of choice for pre-slumber browsing, leafing through the Sunday edition of the New York Times or watching a chick flick in the comfort, and privacy, of your own bathtub.

But for Divisi Strings, which has dominated Houston's market for event music, Apple's marvel is its answer to the age-old problem of filing, organizing and playing from endless pages of sheet music for the myriad of events during which the ensemble performs every week.

The string quartet showed off its 21st-century approach at Rienzi's Punch Party: The 18th Century Imbiber Thursday night. Playing through selections by Lady Gaga, Michael Jackson, Usher, Journey, Katy Perry, The Beatles and Etta James, the group affixed a lovely, chic and sophisticated milieu to the exploration of historic libations and 18th-century sustenance. The audience was intrigued.

The ensemble outfitted each musician with an AirTurn Page Turner (on sale at TheGigEasy starting at $124.95). The Bluetooth-equipped foot pedal allows absolute control. One foot-switch turns pages forward, another backwards. The matching iPad stand completes the sleek setup.

Aside from electronic sheet music and iPads, Divisi invested upwards of $800, which included forScore 3 music reader for iPad, an app which stores thousands of pages in just about 1.5 pounds.

"We started using this technology last month and it has helped us keep many pieces and songs organized," violinst Tony Sanville says. "It has also created a new visual aspect and a technological element that is very intriguing to people. They want to know exactly how it all works."

The members prepare a playlist ahead of time. Without any physical page turns, the musicians can deliver a seamless performance with little or no silence between pieces or songs. For the listener, it means more music and less waiting.

"It really revolutionizes not only the way the patrons view you but also what the ensemble is capable of doing," Shelli Mathews, Divisi Strings' founder and manager, says. "With Ampd Quartet (our pop music ensemble), most of what we play is based on open forum requests. We hated saying, 'Oh, Man! We didn’t bring that one.' Now, everything is just a click away."

"My iPad — because I am the leader — is the hub so I personally have about 3,500 selections," Mathews continues. "In a pinch, we are able to Bluetooth selections to each other’s iPad. So if someone is missing something, I can send it over to them within seconds."

There's only one issue. Remembering to charge the iPads.

At Rienzi's Punch Party: The 18th Century Imbiber, listeners were intrigued by the string quartet's setup.  Photo by © Michelle Watson/CatchLightGroup.com

Get to know this creative EaDo bakery, plus Montrose's hottest new bar
Tapping in to a crafty Houston brewery, plus dining out in River Oaks
A Goode chat with restaurant royalty, plus a tasty Houston's tribute