By Dillon Sorensen
Jun 7, 2011, 10:51 am
Proenza Schouler duo Lazaro Hernandez, left, and Jack McCollough were named womenswear designers of the year at the CFDA Fashion Awards
After five years in the running, Michael Bastian took home the CFDA menswear designer of the year honor. Courtesy of Gant 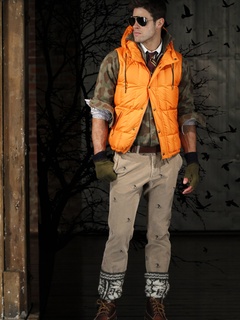 While some members of the CultureMap staff weren’t too thrilled about some of the honors being issued at Monday night's annual Council of Fashion Designer of America awards, I can genuinely say that I am.

Finally – after five years in the running – Michael Bastian won the Menswear Designer of the Year award. Bastian, who started his eponymous collection after a five-year stint as the men’s fashion director at Bergdorf Goodman, is the only designer in CFDA history to have been nominated for an award every year since the inception of his brand.

In addition to his somewhat exclusive flagship label, Bastian has designed a capsule collection for Gant that includes both men’s and womenswear, in an effort to make his designs slightly more accessible. He’s known for putting contemporary twists on Ivy League sportswear, and producing luxurious garments that are impeccably tailored.

Don’t get me wrong: Patrick Ervell and Simon Spurr, the other two nominees for the menswear award, are both excellent designers in their own right. But for Bastian, this has been a long time coming.

Some winners, on the other hand, were slightly more surprising. I was almost positive that Alexander Wang would be taking home the Womenswear Designer of the Year Award. As a designer, Wang could not be more relevant right now: his slouchy, masculine and always chic approach to womenswear seems to cause loyal twentysomethings to snatch up his pieces in droves.

Even CultureMap editor Clifford Pugh told me via e-mail that his money was on Wang, “unless they’re feeling nostalgic for Marc.”

Thus, I’m pretty shocked that the CFDA chose to give the award, once again; to 2007 winners Jack McCollough and Lazaro Hernandez for their senior Parson’s School of Design thesis turned luxury label Proenza Schouler.

Wang did not come empty handed, however: he won the Accessory Designer of the Year award.

The recipients of the Swarvoski awards for emerging designers were Robert Geller for menswear, Prabal Gurung for womenswear, and Eddie Borgo for accessories. Other honorees for the evening included Lady Gaga, who was given the Fashion Icon award, and Marc Jacobs, who received Geoffrey Beene Lifetime Achievement Award.

What do you think: did the best designers win?