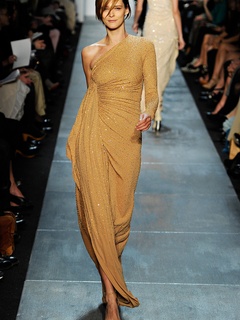 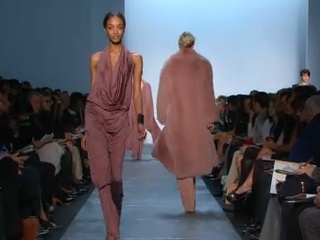 A young Michael Kors, center, is featured in a special ad that wraps around today's edition of Women's Wear Daily.

Michael Kors celebrated 30 years in business with a star-studded runway show that harkened back to the disco days of 1981, when he launched his label at age 22.

To the tune of the Donna Summer hit, "I Feel Love," Kors sent out models ready to party all night in luxuriously decadent fabrics. While he featured casual daytime looks (tailored trousers and jackets; smoky-colored shifts), the real sizzle came in evening wear, with cashmere togas, draped tunic dresses with exposed backs, trench bodysuits — in black, plum, nude or studded with crystals — and chiffon pajamas.

Top models Karolina Kurkova and Isabeli Fontana, who rarely do runway shows nowadays, joined in the celebration. Fontana wore a black stretch bodysuit and long skirt that showed a lot of leg while Kurkova looked slinky in silk charmeuse pajamas and cashmere pullover and carried a fur messenger bag.

Kors' choices for men were a little more circumspect — gray or black flannel trousers, sweaters and jackets were the norm.

He featured more than 60 looks, but he always paces the show so quickly that nothing lags, and when it's over, you're sorry it is. This time, when he strolled the length of the runway to "Native New Yorker" at the end of the show, it seemed to have special meaning.

The designer's celebrity pals turned out in full force. A fit-looking Michael Douglas and wife, Catherine Zeta-Jones, caused a paparazzi stampede but handled it with the grace that comes with being in the limelight for a long time.

Also in the front row: Angelica Huston, Angie Harmon, Bette Midler (with a ukelele under her seat for a backstage serenade to Kors after the show), Emma Roberts, Patti Hansen and Debra Messing.

"He's my go-to designer," Messing said. "He never lets me down. He makes me feel sexy and beautiful. And he's become a good friend."

Huston flew in from Los Angeles to celebrate Kors' anniversary and planned to fly back after the show was over.

"Michael is true to his friends," she said. "He's a true friend, and I really believe in him."

To see the full collection go to vogue. com

A young Michael Kors, center, is featured in a special ad that wraps around today's edition of Women's Wear Daily.