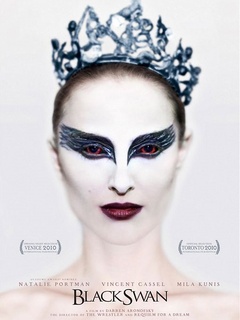 Natalie Portman is likely a shoo-in for a Best Actress Oscar nomination.

You should put every dance movie you’ve ever seen entirely out of your head before seeing Black Swan. The world of dance is always presented as demanding—as being physically and emotionally hard on its protagonists. How could it be otherwise?

But at the same time, films from Michael Powell’s The Red Shoes to Robert Altman’s The Company all wind up genuflecting before the altar of dance beauty. That’s why you go to a dance movie, to be with the protagonist while he or she suffers, and then vicariously enjoy their triumph over their nearly inhuman discipline, when the beauty of their work makes all their suffering worthwhile.

Not this time. Director Darren Aronofsky is not very interested in the aesthetics of dance, nor in triumphs of the spirit. In films going all the way back to 1998’s Pi, Aronofsky is most compelled by the spectre of psychic disintegration, often incurred in the pursuit of perfection.

That’s because Nina is still a girl, sexually and in every other way. She still sleeps with the stuffed toys of her childhood, and her obsessively protective mother (Barbara Hershey) sometimes sneaks into her room at night to watch her sleep. Thomas tries to goad Nina into developing and displaying the sexuality the Black Swan needs, and at one point tells her to “go home and touch yourself.”

Nina is so pliant, so obedient that she does just that, only to find that Mom has slipped into her room.

Nina pushes herself, trying to break through into her long-delayed womanhood, but the effort comes close to destroying her. Mom’s paintings come to life and laugh at her, a rival dancer appears to have a completely split personality, and other even more untethered images haunt her.

Portman suffers for her art here. This is a defining role for her, and she squeezes every last drop out of it. Her dancing is barely plausible, at least for a role such as the Swan Queen, but, again, Aronofsky isn’t interested in technique or aesthetics; he’s only interested by capturing physical and psychic suffering on film, and that goal he and Portman achieve brilliantly. Portman’s own apparent struggle to dance convincingly supercharges her performance, and her final transformation into the Black Swan is truly powerful.

This is rather nutty stuff, as if the early Roman Polanski had been turned loose on the The Red Shoes — if Polanski had a touch of the schlockmeister in him, that is. It’s certainly a male fantasy; some have even called it a misogynistic one, in the way that the director of the ballet takes control of Nina’s spirit and body.

But, as Donald Barthelme once said, some male fantasies are better than others. Aronofsky’s version is wild, powerful, and unforgettable.