Cassandra Black in Powder Her Face Photo by Shannon Langman 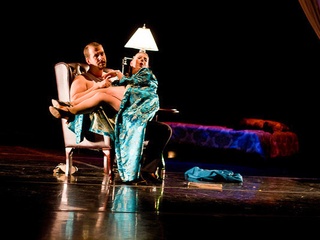 “They wrote songs about me,” the Duchess sings defiantly time and again during the course of Thomas Adès and Philip Hensher’s Powder Her Face. Apparently she’s referring to Cole Porter’s classic You’re The Top, even if a reference to the actual Duchess of Argyll never appeared in his original lyrics for that song.

Rather, the phrase seems more self-referential, indicating the opera itself. It is without doubt the most extraordinary “song” that will ever be written about the notorious Duchess and the people who simultaneously shamed and celebrated her. The 1995 chamber opera for four singers and extended orchestra is disturbing, funny, bizarre, graphic, scathing, razor-sharp, and hardly sentimental.

Thursday night at Zilkha Hall, Opera Vista presented a deeply sophisticated staging directed by Houston Grand Opera’s Sandra Bernhard. The performance not only confirms the limitless talents of the company but also advances its position as a major proponent of contemporary opera in America.

The performance not only confirms the limitless talents of Opera Vista but also advances its position as a major proponent of contemporary opera in America.

Opera Vista founder and artistic director Viswa Subbaraman looked dazed and exhausted when he took his curtain call. For two hours he’d led what appears to be the most cumbersome, unmanageable score in the modern repertory. It’s difficult not to use superlatives here. Never mind the strings, trombones, or accordion-who’s minding the fishing reels? Yes, there are several called for in the troubling sixth “trial” scene.

The evening got off to a strange start with an impromptu speech in the lobby by Jonathan Churchill Sandys, great-grandson of Sir Winston Churchill. Who knew that the “international speaker” (according to his introduction) is based here in Houston?

Sandys explained that he had never seen the opera, but nonetheless has a certain familial connection to the events portrayed. He is the grandson of Lord Duncan Sandys (Churchill’s son-in-law), who was allegedly one of the “headless” men in a series of explicit Polaroids presented at the Duchess’ 1963 divorce proceedings.

Sandys didn’t tell the crowd much more that it could have learned from searching Wikipedia, but he was lively and pompous, managing to garner a few laughs with wry anecdotes about Churchill and his grandfather.

The opera begins with odd vocal lines of laughter from The Maid (sung brilliantly by Kelly Waguespack) and The Electrician (sung by the gifted Benjamin Robinson) blended into an ironic tango, but theirs is an uncomfortable form of cheer. The singing is histrionic, way over-the-top, but what is most shocking is the orchestral texture. Neither tonal nor serial, the fragmented-yet-continuous music appears to be one big roar of noise until you manage to let your ears and brain recalibrate. It’s like a basket full of fragments, thrown into the air all at once.

Adès is clearly referencing a number of “fallen diva” operas. Alban Berg’s Lulu comes first to mind, along with Poulenc’s La voix humaine and Schönberg’s Erwartung. There are numerous references to the tango of Piazzolla, nostalgic fox-trots, and other forms of “palm court” music. In the end, however, he doesn’t pay heed to any particular tradition or boundary, and the result is perhaps best acknowledged as dense, supreme irony.

Such an opera cannot succeed without a commanding soprano in the lead role, and Cassandra Black is nothing short of thrilling as The Duchess.

Such an opera cannot succeed without a commanding soprano in the lead role, and Cassandra Black is nothing short of thrilling as The Duchess. This is a role to conquer, but not without showing equal parts of defiance and vulnerability. It seems a paradox that as the character ages, her singing becomes greater, bigger, more insistent. As well, it becomes even more at odds with the orchestra, and Black never wavered in her portrayal, delivering every phrase with the utmost perfection.

She is a consummate actor as well. The Duchess of Argyll was accused of “disgusting sexual activity” by the judge at divorce proceedings. The Duke of Argyll’s attorneys presented evidence of her liaisons with at least 88 different men. Yet as she lingers in old age in a room at the Grosvenor House, she sings a cruel aria about declining morals in London: “There is no beauty, Black men buy houses, Jews are everywhere and buggery is legal, the young are fucking in the streets!” It’s a complicated character, to say the least, and Black manages to show every side of her as if reflected in a broken mirror.

Kyle Albertson is equally brilliant in a series of roles from Hotel Manager to judge. His extended aria as the latter, accompanied by some strange whistling instruments, is a climax in the sixth scene and perhaps the entire work. “She is a Don Juan among women,” he exclaims, Holy Bible raised in condemnation.

If you want to witness great singing and acting, if you want to hear the epitome of the post-modern aesthetic in very late 20th century opera, this performance is for you. Opera Vista offers its second and final performance tonight. It’s an experience you will never forget.

Cassandra Black in Powder Her Face Photo by Shannon Langman