Early Bird Rockers
Radiohead pulls a ticket surprise, starts sale at 6 a.m. — and everything sells out in 30 minutes 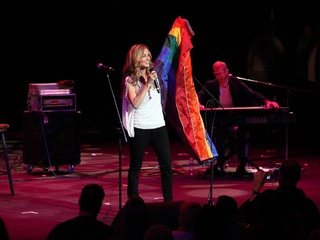 Chely Wright in Wish Me Away Photo by Tanya Braganti 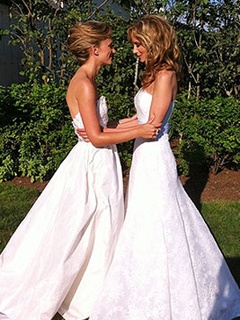 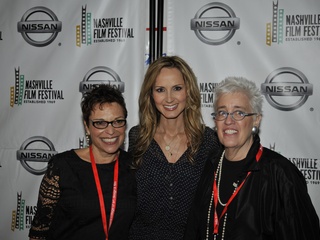 From left, Wish Me Away co-director Beverly Kopf, Chely Wright, co-director Bobbie Birleffi at the movie's premiere in Nashville Photo by Pierre Vreyen/NaFF

There she was, just a few days ago, at the Starz Denver Film Festival for the regional premiere of Wish Me Away, the award-winning documentary that offers an inspirational account of her coming out as the first significant country music artist ever to acknowledge being gay.

To accommodate the sellout crowd, festival organizers had moved the screening — and a post-screening Q&A with Wright and co-directors Bobbie Birleff and Beverly Kopf — from its originally scheduled venue to Highlands Church, a house of worship that advertises its philosophy thusly: “We believe that everyone is invited to experience God’s grace—and that no one is ever disinvited.”

Chely Wright found a loving and supporting life partner in Lauren Blitzer, the LGBT activist she married last Aug. 20. On that very same day, by the way, Kim Kardashian married Kris Humphries. Insert joke about the sanctity of marriage here.

Wright felt very, very welcome there. But she couldn’t resist exclaiming: “I can’t believe we’re showing the gayest movie ever made – in a church!”

But, really, why not? As Wright repeatedly declares in Like Me, her remarkably candid autobiography, and in Wish Me Away, which will have its H-Town premiere Thursday evening as part of Cinema Arts Festival Houston, faith always has played a major part in her life.

To be sure, there were times during her childhood in conservative Wellsville, Kansas, when religion fueled her self-loathing. (Frightened by “forbidden” urgings as she realized she liked girls more than boys, she repeatedly prayed: “Dear God, please don’t let me be gay.”)

But now she considers herself truly blessed to have been given the strength to be honest with herself about herself – and to have found a loving and supporting life partner in Lauren Blitzer, the LGBT activist she married last Aug. 20.

(On that very same day, by the way, Kim Kardashian married Kris Humphries. Insert joke about the sanctity of marriage here.)

There was a time not so long ago when Wright felt she was damned to live a life of deception.  She took Nashville by storm in the early 1990s, and wasted little time in developing a loyal audience, earning accolades (including the Academy of Country Music’s 1995 prize for Top New Female Vocalist), and climbing the charts with popular singles (such as the No. 1 hit “Single White Female”).

But success only served to intensify her determination to live a lie while in the spotlight. She strove mightily to pass as straight – and at one point had a very public relationship with Brad Paisley -- even while, off stage and in secret, she shared a home with a female lover.

Deceit and denial took a heavy toll. Late one sleepless night, she placed the barrel of a gun in her mouth, and seriously considered pulling the trigger.

Wish Me Away is structured more or less as a countdown to the day in 2010 when Wright came out very publicly – with her tell-all autobiography, a People magazine profile, and appearances on Oprah and The Today Show – after months of carefully coordinated planning that the filmmakers indicate was only slightly less meticulous than the run-up to D-Day.

The movie has a happy ending: Wright, greatly relieved to have unburdened herself, vows to use her “public capital” as a celebrity to provide comfort and encouragement for young gay people who fear rejection or worse if they, too, come out.

But, of course, the story didn’t end there. Indeed, it’s still a work in progress. Wright spoke freely about her life before and after the making of Wish Me Away – and about her mixed feelings regarding certain aspects of the film – in a backstage interview shortly before the Denver Film Festival premiere.

CultureMap: In Wish Me Away, your mother seems emotionally distant, if not downright unstable. And not just because she refuses to deal with your coming out. Wouldn’t you agree that she comes off a bit better in your autobiography, Like Me?

CM: Please don’t misunderstand: Wish Me Away is a terrific film. But in your book – in the early chapters, at least – your mom seems very supportive, doing everything from encouraging you to stand up for yourself against school bullies to paying for your piano lessons. It’s just that, well, later on…

CW: Yeah, I guess I’m in your camp on that one. And that’s one of the reasons why it’s hard for me to watch this film. Because, you know, I love my mom. And I can say this with all the confidence in the world – if there are any great parts of me, my mom has a lot to do with it. And my brother and sister and I would stand here lined up like stairsteps to tell you that many of the great parts of who we are, are because of our mother. So it’s hard to watch sometimes this sound bite version of who our mother is in the film.

But, that being said, our mother has reduced herself over time to what she is. It’s as if she was a supernova – as if all her great parenting was early. And then something happened. [Pause] Something happened. It’s sad, and it hurts to watch. And there are times when I want to jump up in the middle of the film and tell the crowd: “But she’s my mommy. My mom made a Raggedy Ann doll for me. My mom paid for seven-dollar piano lessons for me when we didn’t have any money. That’s my mommy.”

CM: Wish Me Away is fascinating both as a biographical portrait of an entertainer at a turning point in her life – and as an backstage look at how that entertainer prepares to make a revelation that a lot of people might view as career suicide. Because you really did have to plan this carefully, right? It’s not like, at the end of a concert some night, you could just impulsively out yourself.

CM: So the movie follows you as you’re getting ready to be open and honest – while at the same time being careful and calculating. How aware were you that you that you were taking an approach that was – oh, I don’t know, kinda-sorta schizophrenic?

CW: Oh, I was hyper-aware. There was a lot going on there, a lot of moving parts. First off, I was putting a record out. Then, I was working on a book. I’d never put a book out before, so I didn’t know all the stages of that. And I wrote it all myself – I didn’t have a ghost writer. And then I was steeling myself for the event of coming out. So I was hyper-aware – and, yes, it was schizophrenic, it was crazy. But at the same time, it was all so precision-focused. And I had the best team helping me.

There was criticism, of course: “Oh, she planned it all.” Well, yes, you bet I did. And it was my idea. And I make no apologies that I had the idea to come out well. I won’t apologize for recognizing that I was uniquely positioned to have a dialogue with fans of country music – to use my public capital, in a way, that I had paid into.

CW: Is that why you employed PR expert Howard Bragman?

CW: The great coming-out guru? Well, you don’t tell Howard Bragman how to do anything. That would be like going to a cardiologist and telling him how to do my heart surgery. You just hire the best, and then you defer to their sensibilities.

It’s like when I sat down with Howard, and I told him that I wanted to admit my homosexuality, he said: “You don’t say you ‘admit your homosexuality.’ You say you acknowledge being gay.” It was like going to gay school – I learned so much from him.

CM: What other lessons did you learn during this process?

CW: I learned that something like this had to be carefully orchestrated. And I got to tell you – it really was something to see, how the phone calls were a-flyin’ between the record label, Random House, the different publicists and managers.

CM: How did the process start?

CW: Well, I started working on the book in 2007, and wrote it on blind faith. Didn’t have a publisher yet. But I had decided that far back that I was coming out. See, I was right in the middle of finishing my album [Lifted Off the Ground] with Rodney Crowell. Nearly finished, actually. And I found myself thinking, “How am I going to be talking about these very, very intimate songs? I don’t want to go back out on the road and make up some story about some fake boyfriend in Argentina or something that I had a break-up with.”

Around this time, Vanguard Records had heard the almost-completed album, and they decided they wanted to release it. So I flew to L.A., sat down with Kevin Welk, the head of the company, and I said, “I love that you love my record and you want to put it out. But I got to tell you something – I’m about to come out.” And he looked around to his team, and then turned back to me, and said, “I love it. Just tell me when you’re going to come out, and that’s when we’ll release it.”

Of course, had I known that it was going to take a couple more years, and we were going to have to sit on that record…

CW: Actually, I finished my book before they bought it. Like I said, I had committed as far back as 2007 to writing this book. And I didn’t care if anyone was going to publish it. I didn’t care if I’d have to go to Kinko’s, and bind it myself. I think a lot of people thought I was offered a book deal to come out. But that’s not how it happened.

CM: Throughout the three years covered in Wish Me Away, were there ever times when you woke up in the middle night and thought, “You know, maybe this isn’t such a good career move?” Or, “Maybe I don’t want to do this. At least, not yet, not right now. Maybe later?”

CW: Not one time. Now, sure, there were nights when I would go without sleeping, or I’d wake up with anxiety, and have fears like, “Oh my God, what’s going to happen?” But I promise you: I don’t know if you’re a person of faith, but I am. And the day that I decided to come out, in July of 2007… I promise you, I was so relieved. And my life just got better. I know it’s an overused phrase, but I felt like a weight had been lifted off me. I felt lighter. I felt like I began to age backward.  I breathed deeper. I slept hard that night. I started eating again. Everything got easier.

So I never, never thought for a moment that I wouldn’t do it.

(Wish Me Away will be screened by Cinema Arts Festival Houston at 9:45 p.m.Thursday at the Edwards Greenway Grand Palace.)

Chely Wright in Wish Me Away Photo by Tanya Braganti