Forget one time at band camp: This flutist is hardcore

Forget one time at band camp: This flutist is hardcore 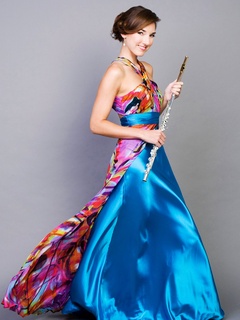 Mercedes Smith is leaving Houston — and selling her Vespa. Photo by Vika Filippov

Can being a classical musician be hardcore?

It is the highly competitive aspect of gaining employment in the classical music field that it makes those in the industry often say that one wins a job rather than finds or gets one.

A feat not unlike making it as professional athlete, the comparison is rather accurate when you look at the individual statistics between wishful candidates and available opportunities, as well as the amount of training, dedication and perseverance that is required from those who decide to embark in this comparatively narrow musical journey.

Perhaps the flute does not have the most athletic of connotations, tainted a bit by the overused “one time at band camp” colloquialism. After all, it’s a flute. It is thought of as somewhat (shall I dare say it?) feminine instrument.

But its mastery, or the mastery of any instrument for that matter, is dependent on the precise development of minute muscles, some which others do not use and often are not even consciously aware they exist.

So, can being a flutist be hardcore?

We sit with the stylish and sassy Mercedes Smith, principal flute of Houston Grand Opera (HGO) and Houston Ballet and find out what it takes to tear it up, flutistically speaking, after winning two major auditions.

An accomplishment that could be compared to an Olympic achievement, Smith took the $5000 first prize for the 2010 Young Artist Competition organized by the National Flute Association (the other and more culturally inclined NFA) as well as the position of principal flute with the Pacific Symphony in Orange County, California.

CultureMap: Winning a competition is a huge accomplishment. Winning an audition a week later is unheard of. How were you able to prepare such different repertoire in a short period of time and come out on top?

Mercedes Smith: Musicians are like athletes. If you take any time off at all, you suck. You have to be in shape, and I feel like that's how I was able to get through both the Young Artist Competition and the Pacific Symphony audition a week later. I could pull it together and do it.

I put all the stress and work prior, and then let my body relax and do what it had learned. The mental preparation is similar to many solo sports, whereas orchestra performance can be compared to team situations.

CM: Athletes are considered cool while classical musicians are thought of as pseudo dorks. Is it possible to change that perception?

MS: I was the ultimate super dork. In Plano, I was in public school through sixth grade where I started to play the flute. We moved to Mountainburg, Arkansas, population circa 400. The rural school was literally one building for all grades, so my parents decided to home-school me through high school.

When you are home schooled, you get through material much quicker, so I had time to practice three to four hours a day. I was so competitive that all I did was music. I definitely wasn't one of the cool kids. To this day I'm still surprised I managed to develop the social skills necessary to function in the real world. I have no idea how I made it out.

And to answer your question, yes, it is possible to change the dork perception. Classical music is a very sophisticated field and there are many musicians out there that are very polished and refined.

CM: Moving to New York to study at the Manhattan School of Music must have been a culture shock. How did you adjust?

MS: It was more like thank God, I totally fit in here. But I was still trying to find myself. And with all the freedom in the world and being in New York city, life was crazy.

When I was a freshman, the dorms were the top three floors of this seven-story building, while the bottom floors were rented, lets say for short periods of time. It was full of very colorful personalities.

CM: You won your current position at a very young age of 20. Do you have a favorite memory when you first moved to Houston in 2003?

MS: I’ll never forget one of my first performances with Houston Ballet. With me, when I have a disaster, it’s usually not funny.

I parked my car when one of those infamous Houston torrential downpours with heavy winds started. I knew my umbrella wouldn’t hold up, so I made a run for it. Losing a shoe, which floated down the street, and arriving completely soaked, it was a lady in the wardrobe department who found a long sleeve pajama-like black shirt for me to perform in.

It wasn’t one of my finest moments, and my bare legs were showing. Luckily, my clothes were dry by the first intermission so I could run backstage quickly and change. Good thing most people don't notice those of us in the orchestra pit!

CM: I have always wondered how performers get through the Nutcracker season. How do you keep yourself focused when playing the same piece day after day?

MS: There is actually a group of people in the orchestra that make a schedule of things we can do to keep us from going insane. There is crazy sock day, crazy tie day, and they used to have crazy big hair day, but they banned it due to visibility issues with the conductor, I think. The five days of secret santa is always fun. There is also a poetry reading night, Chanukah night, trivia night, and snacks. It’s really mostly about the food and all of this happens at intermission.

We do about 35 performances between Thanksgiving and New Years and although I can play it in my sleep, I can still makes mistakes.

CM: What will you miss most about Houston?

MS: Definitely all the friendships I have made here over the years. I have a great life here. Cost of living is low, I own a house, a dog, I live close to work and I drive a Vespa. It is definitely easier to live here than other places.

As much as I am looking forward to playing standard orchestral repertoire, I am thankful I had the opportunity to perform many operas and ballets that otherwise I would never have had the chance to play.

My last performance run with HGO is Britten’s Peter Grimes  (which plays Saturday, Wednesday and Friday night at Wortham Theater Center) will be bittersweet. It’s a great work with very challenging individual parts.

I start my work in OC in December.

Do you know anyone that wants to buy a Vespa?