More than cowboys
And the first four 2011 Houston Rodeo headliners are ...

Peter Grimes is Mercedes Smith's goodbye
Forget one time at band camp: This flutist is hardcore
LATEST NEWS
Here are the top 15 things to do in Houston this weekend
The CultureMap Interview 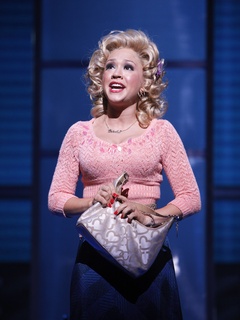 It's 1979. For three working women, their hair was big but their dreams were bigger. Frankly we're not sure why it took nearly 30 years to bring the classic comedy 9 to 5 to the stage, but with a Tony Award-winning score from Dolly Parton, the first-ever national tour of 9 to 5: The Musical stars Broadway vets Dee Hoty, Mamie Parris and American Idol runner-up Diana DeGarmo stepping into the role of Doralee Rhodes originated by Parton herself.

The Theatre Under The Stars production will run at the Hobby Center for the Performing Arts from November 9-21. CultureMap caught up with DeGarmo to get her thoughts on Parton, country music and the American Idol shakeup.

CultureMap: Were you a big 9 to 5 fan before?

Diana DeGarmo: I've been a big fan of the movie because I'm a big Dolly Parton, fan but I really got into it when I saw the Broadway show last year.

CM: How does it feel to step into Dolly Parton's role?

DD: It is a big, broad feel, for lack of a better word. It's exciting and it's fun and I know that I'm giving my all and having a great time doing it. Having Dolly's support definitely erased any fears of the role, even though the first couple weeks you always say "What have I gotten myself into?!"

CM: How much is your performance influenced by her? How have you made the role your own?

DD: I do my own interpretation, I'm not a Dolly Parton impersonator. Dolly created so many quirks for the role, and many of them are still there. A lot of it is similar to who Dolly is as a person, the accent and the, um, physical traits that I don't really have. [Laughs]

The rest of it is how Doralee has her own walk, she's got her own little giggle, she's kind of a spice-and-everything-nice girl but you don't want to mess with her because she'll turn a rooster into a hen in one shot.

CM: How is performing in the theater different from performing on American Idol? Did your experience help you make that transition?

DD: What's very similar to Idol is you're working all the time. On Idol you may only sing two nights a week but you're preparing or working the other five nights. Theater is the same way, it's a lot of work, we're performing six nights a week and we travel on our day off. Being on tour is even harder, each venue is a little different, each city is different — the South gets more of the Doralee jokes, some other places the jokes might not be understood as well.

CM: You've been working on a country album, has 9 to 5 inspired you?

DD: I love playing Doralee, she's the first character who's similar to who I am as a person. It's the first show that's bridged the gap between my musical theater world and my recording world. It's so great to perform country music up on stage, people have been trying to do a country musical for a while now and this is the first one that's really taken off.

CM: It's so refreshing to see a show with three strong female leads. How do you work off each other?

DD: We really lucked out with casting, we get along really well. When they have to be mean to Doralee it's really hard! But that's how it is at the beginning because people don't really understand Doralee. Jeff Calhoun, the director, says there are two things he does well: tapdancing and casting.

He really knows how to cast well, to pick people who will work well together. It's fun to see three very different women conquer the world and conquer the workplace. And I should add that guys can come to and crack up. We've come so far the in the way women are treated we can look back at the absurdity and laugh. If things hadn't changed so much it might be a little more uncomfortable.

CM: Back to Idol, I'm curious what you think about the new judges.

DD: I'm a big believer that if it ain't broke, don't fix it, and that's what they started doing with the fourth judge, and then taking out Paula (Abdul). I think the three originals will always be the best but it will be exciting with J-Lo and Steven Tyler to see who's gonna take what position.