Final week at Hiram Butler
Projections: Artist Will Henry decodes the myths and realities of the 21st-century American West
LATEST NEWS
From farmers markets to fine jewelry, find it at River Oaks District
Movies Are My Life 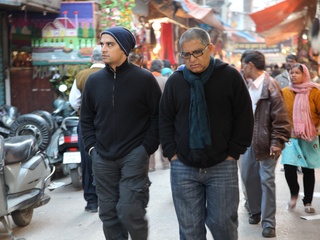 Gotham Chopa, left, takes a walk with his famous father, Deepak Chopra in a scene from the movie, Decoding Deepak Courtesy Photo 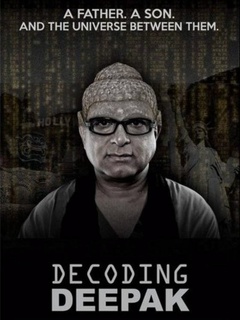 OK, here’s the inside dope on Deepak Chopra: He’s a Blackberry addict. And a chronic multi-tasker. And a compulsive grabber of other people’s attention.

Any skeletons in his closet? Sure. In fact, back in the days when he was an intern working in an emergency room – he was repeatedly jazzed by the emergencies: “I would enjoy the bleeding,” he freely admits. “I hate to say it, but I would enjoy the suffering.”

All these revelations and more are yours for the savoring in Decoding Deepak, an up-close portrait of the celebrity spiritual guru – now on display at the Sundance Cinemas —directed by his son, author-filmmaker Gotham Chopra.

"Well, obviously, I was always thinking, right from the start: 'Wow, I hope he doesn't hate this film.' ”

It’s not exactly a warts-and-all expose – and was never intended to be – but this slickly produced and consistently fascinating documentary is by turns amusing and illuminating, and often both simultaneously, as the younger Chopra draws upon archival footage and newly recorded interviews, and his own observations during a year of journeying with his world-famous father. As I noted in the review I filed for Variety from the SXSW Film Festival last spring:

Fortuitously, Decoding Deepak captures its subject during what evidently was for him an unusually introspective stretch: At the time of production, he was 65 years old, coping with the recent death of a colleague, and, judging by what the [film] reveals, conspicuously conscious of his own mortality. There are moments when Gotham seems visibly surprised – and grateful – to see just how forthcoming his father is. And the viewer cannot help thinking the entire experience served both men very well.”

Gotham Chopra phoned a few days ago to talk about that experience. Here’s some of what he had to say.

CultureMap: When you introduced Decoding Deepak at SXSW last spring, you mentioned that your father reacted favorably to your film. But what has been his reaction to other people’s reactions?

Gotham Chopra: It’s funny: My father now will call every day to ask, “Well, how’s the film been doing?” And I’ve been giving him feedback from other places where we’ve been screening the film. Because he seems to be fascinated that people care about the film – and about him. And I’ll sometimes tell him, “Hey, maybe some people just appreciate good filmmaking?” [Laughs] So we’ll kind of have our fun talking about it.

But really: I think that, as much as he’s – quote, unquote – detached from all that, obviously there’s an element of curiosity about how people are perceiving the film – and perceiving him, I guess.

CM: Going in, were you at all worried whether he would be, ahem, unhappy with the portrait you’d present?

GC: Well, obviously, I was always thinking, right from the start: “Wow, I hope he doesn’t hate the film.” Because it’s a very honest film and all that. But I have to say, I was never too worried. I know my father well enough to know that he doesn’t easily offend. He’s very comfortable and secure with himself. If there was one thing I was a little bit worried about, it was that it could be perceived that I was providing ammunition for his critics. Because I certainly didn’t want to give anyone the means to attack him even more. But that hasn’t happened. Or even if it’s happened, it’s sort of irrelevant, and I’m not that concerned about it anymore.

"It’s funny: My father now will call every day to ask, 'Well, how’s the film been doing?' "

CM: You seem to have caught your father at a unique point in his life, during a period of reflection and self-evaluation. Do you think Decoding Deepak would have been a very different movie if you’d made it one year earlier – or a year later?

GC: In terms of measuring my father in a film, I think he was in a particularly contemplative mood. He’s in this interesting place, where he sort of has one foot in and one foot out. As the film shows, he’s still very engaged in his work and everything that he’s doing. But there is a part of him that is also in this very reflective place. At the age that he’s at, I know there’ll be an inevitable slowing down. But I think I was able to capture something at this time that was very unique.

Another thing: And this is so not unique to my father – it’s a tale as old as time – but he’s got these grandchildren now and he has this relationship with them that is very different than he’s ever had with his own children. And I think maybe they’ve forced him to be present in a way that none of his meditations and all that do. That’s probably brought him to a new level of reflection as well.

Actually, this was also a unique period in my life, becoming a dad myself of a young son. And also at a point where I was looking at my family, and the work that we do together, as very valuable and precious and fulfilling. But it’s also a period that’s… Well, I can assure you: My next film will not be on my family, will not really have anything to do with my father. To me, this is something I wanted to do. I feel good about it. And obviously I have high hopes about it, and I want it to do very well.

CM: But now it’s on to other things?

CM: Well, before you go, a couple final questions. Were you ever really shocked by anything your father revealed about himself?

"The only thing that really surprised me was his candor."

GC: The only thing that really surprised me was his candor. I mean, he knew that I was filming. He knew that I was putting together this project. So his willingness to talk about these things so openly, and kind of be vulnerable – that was a bit surprising. I guess it goes back to what I said: He’s pretty secure in himself, and pretty detached in his own way. He knows what his critics say about him – he’s kind of interested in it, actually – but he doesn’t let it determine how he acts.

CM: And of course, you’ve been every bit as equanimous while reading critiques of your film, right?

GC: [Laughs] It’s pretty obvious while reading the reviews and the articles about the film that people see it in what they want to see. Some people definitely have been critical, and say things like, oh, well, it doesn’t go far enough. Or it doesn’t challenge my father.

But really, that wasn't the goal.

Gotham Chopa, left, takes a walk with his famous father, Deepak Chopra in a scene from the movie, Decoding Deepak Courtesy Photo