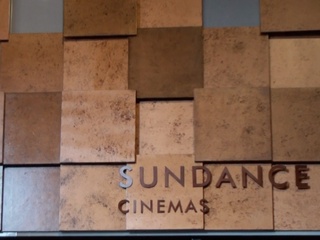 A rust-colored collage hangs above the concession stand in the new Sundance Cinemas lobby in downtown Houston.

There are fewer seats in the new Sundance than there were in the old Angelika, but each seat is roomier.

A view of the trellis in the Sundance lobby. There's a lot of work to be done before the Nov. 23 opening. Benefit preview parties are planned for Nov. 21 and 22.

There's a lot of work to be done before Sundance Cinemas opens to the public on the day before Thanksgiving, but the new theater complex in Bayou Place promises Houstonians a unique moviegoing experience.

Dodging workers busily laboring to get the space finished in the next three weeks, President and CEO Paul S. Richardson and executive vice president of marketing Nancy Klasky Gribler led a small group of reporters on a tour Wednesday, while listing the ways the new theater complex, owned by Robert Redford's Sundance Group, will be different.

The configuration of the former Angelika Film Center is the same, with a large, high-ceilinged lobby, a long hallway bisecting the space and eight theaters. But the Sundance officials promise when it is finished the new theater complex in downtown Houston will look nothing like its predecessor.

In a new twist for many Houston moviegoers, all seats to every show are reserved at Sundance, so patrons select their seats when buying tickets. Richardson believes Houstonians will take to the new system just as moviegoers have at Sundance's other complexes in San Francisco and Madison, Wis.

The first thing a moviegoer who remembers the Angelika, which closed abruptly in fall 2010 after a dispute with landlord The Cordish Companies, will notice is that the ticket windows facing Texas Avenue are covered up. Instead, moviegoers can purchase tickets from a new box office located inside to the right upon entering the lobby or several ticket kiosks to the left.

Another alternative: Richardson is hoping that many moviegoers will have already purchased their tickets and picked out their seat online at home before arriving at the theater with a printed-out copy.

In a new twist for many Houston moviegoers, all seats to every show are reserved at Sundance, so patrons select their seats when buying tickets. Richardson believes Houstonians will take to the new system just as moviegoers have at Sundance's other complexes in San Francisco and Madison, Wis.

"Our customers lead busy lives. They need all the conveniences we can give them," said Richardson, who attended the University of Houston in the '70s and was a longtime executive with Landmark Theatres, which owns the River Oaks Theatre.

The new lobby, bathed in rust and green colors, has the feel of an outdoor pavilion, with a wooden trellis and oak tables, a large bar area, called the Sundance Bar, and an art gallery that will highlight the work of rotating Houston artists. The bar will feature beer and wine and extensive food offerings that can be carried into the theater.

"The food will be fresh, not fried," said Richardson. (That may be a first for Texas.)

The long hallway leading to individual theaters is lined with columns made of cypress wood and alcoves that will feature furniture from the Sundance catalogue, so patrons can sit and discuss a movie if they so choose.

The lobby box office also has a woodsy feeling. Vice president of development and construction Dale Friddell, who lives in Conroe, cut down a large oak tree in his yard that had been weakened by Hurricane Ike and killed by this summer's drought to secure the wood for the box office.

"Only one sawmill in Texas was big enough to cut it," Richardson said. "So we have a beautiful box office with a homemade table. It's the kind of thing we do that no one else does."

The total number of seats in the complex has been reduced from just over 1,600 in the old Angelika to around 1,000 in the new Sundance. The new stadium seats are roomier, with a small table between every other seat. The sound system in each theater has been enhanced and extensive renovations have been made to comply with changes in the Americans with Disabilities Act since the Angelika opened in 1997.

"We lost 40 percent of the seats but we made everything more luxurious," Richardson said.

The ticket pricing system will be different too, with higher prices during more popular times. The basic matinee price on weekdays is $7.50, with a $10.50 basic price for evening shows, plus an added "amenity fee" ranging from $1 for Friday and Saturday matinees to $3 on Friday and Saturday nights, so that prices can range up to $13.50 at peak times. (There are discounts for students and senior citizens.)

The amenity fee makes up for lost revenue because Sundance never runs those annoying ads before a movie begins, Richardson said.

In keeping with Redford's environmental awareness, the theater was built with recycled materials wherever possible (seat backs are made from recycled plastic, for example). Theatergoers will be encouraged to place their glass products and plastic bottles in specially marked recycling bins. Wine and beer will be served in glasswear and not plastic. And glasses for 3-D movies will be washed and reused. "Throwing things away is not the Sundance way," said Friddell.

Parking will remain free, with validation. Sundance will set up a specially marked express line inside the theater for quick validation.

As for the movies, they'll be a mix of popular hits that have cultural significance and small, independent films that won't be found anywhere else in Houston. There will also be events like the monthly CultureMap Night at the Movies, hosted by Joe Leydon.

Prior to the Nov. 23 opening, Sundance will host two nights of special preview benefits. The Nov. 21 preview will benefit the Houston Cinema Arts Society and the Museum of Fine Arts Houston, Film Department. The Nov. 22 preview will benefit the Montrose Counseling Center and the Galveston Bay Foundation. Tickets are $25 each night; all proceeds with go to the groups being honored. At the Nov. 22 preview, Jamie Redford (Robert Redford's son) will show clips from his new film, The River Red.

A rust-colored collage hangs above the concession stand in the new Sundance Cinemas lobby in downtown Houston.

There are fewer seats in the new Sundance than there were in the old Angelika, but each seat is roomier.