The Situation's wing man fail
Snooki's smush: Jersey Shore was on fire with grade A man meat
LATEST NEWS
Meet the couple behind the top-50-in-Texas BBQ joint in Spring
Diary of an aspiring filmmaker

The worst parts of making a movie: From finessing the release to B-list celebs with an attitude

The worst parts of making a movie: From finessing the release to B-list celebs with an attitude

Dan Aykroyd couldn't have been nicer. Not all celebrities are like that when you ask them to be in a movie. Courtesy of del monte films 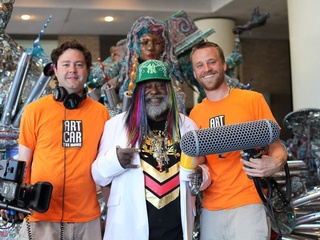 George Clinton did a long interview in front of his hotel. Courtesy of del monte films

Editor's note: Ford Gunter quit his full-time journalism job in Houston to make a movie with his childhood buddy/co-director/business partner Carlton Ahrens. This is part four of his account of chasing the dream with Art Car: The Movie.

After almost 18 months of actually considering myself a filmmaker, or someone who is at least on the path to becoming one, I have managed to compile a list of my least favorite aspects of the job. It took about eight seconds.

3. Smiling and nodding as someone tells me how he or she thinks I should be doing my job (and by the way, I am absolutely positive I am guilty of this on a weekly basis, to everyone from grocery store baggers and crossing guards to politicians and servers, especially at Brasil).

2. Smiling and nodding as someone tells me what he or she thinks I should do with my film when it’s done;

1. Asking someone to sign a release to be in the film.

As I write this, we are in the car in far West Texas, returning from another road trip, this time to a small town on the Arizona-Mexico border called Douglas. There, a man named Harrod Blank is building his dream.

Harrod is a fascinating guy who, among many other things, has been writing books and making movies on art cars for decades. Naturally, asking him to appear in our film was a little delicate, like asking Ken Burns to be in our movie about the birth of American jazz. Of course, like jazz, there’s room for many more than one art car movie, and Harrod knows this and gave us a great interview that we are honored to include. Our film would have been incomplete without him.

(As a side note, Harrod selflessly provided invaluable advice on shooting and shopping our film, so I want to make it absolutely clear that he does not fall into the second and third categories above. That’s one of the coolest things about the members of the film community we’ve met so far — where Harrod could view us as competition, he genuinely wants our film to succeed.)

Of course, examples like Harrod are the exception, not the norm, but no matter how you slice it, it’s not easy getting people to appear in your movie. You’re asking someone to give up a lot of him or herself for what will likely be little gain.

We’re not going to make them famous. They’re not going to get a reality show out of this. Best-case scenario, a few dozen people take an interest in their work, or a few hundred people recognize them at art car parades in the future, or recognize their cars driving around town.

In a nutshell, we aren’t offering them anything but a fleeting ego boost, comfort in the knowledge that someone found them interesting enough to follow around for a few hours, or a few days, or, in some cases, a few months.

We know this, and we accept it. Outside of a handful of meals, beers and the odd T-shirt, we’re not paying anyone to be in the film. (We recently got burned on this — more below.)

Removed from the brutality of currency, there’s an art to asking someone to let you film him or her for free. Rules and common sense say to get the release signed up front, before the cameras roll, to make sure you didn’t waste your time. But releases make people nervous, especially releases that are filled with God-awful legal-speak, and as the interviews mount, it’s easier to push the releases off until later, after everyone is riding high from the successful interview.

Most of our subjects were very cool about it all. By nature, art car artists are somewhat extroverted. They liked being in front of the camera, and liked talking about their art and their motivations. If they don’t mind answering questions at the gas station about why they covered their car in Santas or converted it into a giant chicken, they certainly don’t mind doing it in front of a camera.

Only two people in the art car scene declined to be interviewed, one because he wanted money and another because he just wasn’t interested. Both were fine with us. Can’t expect everyone to cooperate.

Celebrities were another story. For the most part, the reception to our pitch was very positive. Dan Akyroyd, the grand marshal of the 2010 Art Car Parade, gave us a great interview and couldn’t have been nicer about it. George Clinton agreed to meet us before his gig at the International Festival in April, so we brought a car that one of the artists in our film had made with her high school class in his honor, and filmed them talking about the car in front of the hotel.

It was a cool scene, and George was gracious with his time despite the growing crowd. He even let us film some of his show that night.

(We also filmed Sheila Jackson Lee warming up the crowd, but I’m not sure that’s going to make the final cut.)

Mayor Annise Parker talked to us in her office, and former mayor Bill White took time off the gubernatorial campaign trail to talk about what art cars mean to Houston.

We did learn one lesson the hard way, so pay attention. Almost since the beginning we chased one Texas celebrity with ties to past art car events. To make a very long story short (think eight months long), said person wasn’t going to do it for free.

What should have been the first major red flag didn’t register, and we started thinking how much it was worth to lock him up. We set out on this project with the intent to not pay anyone, but we were enamored. In hindsight, it’s clear that we should have walked away the second money came up, since it goes against just about everything our movie stands for. That and the fact that his handler told me, on more than one occasion, “(…) doesn’t give a shit about art cars.”

Like I said, huge red flag. We eventually agreed to $500 but it didn’t sit well from the beginning and after two days — and four days before the interview — we canceled, explaining that we weren’t comfortable paying someone to be in the film. After an ugly afternoon of aggressive phone calls and one or two outright hissy fits, we decided it best to take the high road, pay the money and walk away.

We’re framing a copy of the check, as a constant reminder. You set off without paying anyone, you need to finish the same way.

As far as lessons learned go, it could have been a lot worse. Five hundred isn’t a ton of money to learn a valuable lesson. And we learned it in a way that we won’t forget. It was a disappointing turn for someone I once admired, but I’m sure that’s not the last time the film business will flip my opinions of a celebrity, B-list or otherwise.

On the bright side, if he ever runs for governor again, my vote will be going to one of the other guys.

Dan Aykroyd couldn't have been nicer. Not all celebrities are like that when you ask them to be in a movie. Courtesy of del monte films

Go glamping in a luxe RV and set up camp at these cool Texas spots
Chase beachy vibes this fall with an RV vacation to the shore
Swimming holes and wine via a luxe RV: Your Hill Country guide