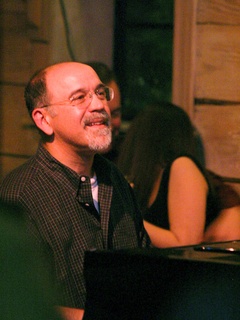 "The goal of an improvising musician is to fuse their total inner self to their musical self in conjunction with their external and ethereal experiences, to join the essence of existence to presentation of sound, to find their own voice." Pianist and composer Joe LoCascio

"I feel very relaxed when I play with him onstage." Saxophonist Woody Witt on playing with pianist Joe LoCascio

Relaxed. That's the word both Joe LoCascio and Woody Witt used in separate interviews to describe what it's like to play as a duo. On Friday at Moores Opera House, Houston will get a chance to hear LoCascio and Witt in a unique and intimate concert of piano and saxophone duets. The program will include standards, original compositions, and possibly songs by composers Alec Wilder and Billy Strayhorn (LoCascio and Witt have recorded a forthcoming album of Strayhorn's compositions arranged by LoCascio for piano and saxophone).

"Our relationship is one of the most unique I've ever had," says LoCascio. "It has traversed not only jazz, but the more traditional idioms as well."

"Our relationship is one of the most unique I've ever had," says LoCascio. "It has traversed not only jazz, but the more traditional idioms as well."

"If you consider some of the work we've done," LoCascio continues. "This (playing as a duo) is one of the most difficult settings we've had to do, because of the freedom involved. Because we know we can get up there and do pretty much whatever we want."

But after years of playing together in several configurations, from big band, to orchestra, and back again to a duo, LoCascio and Witt have developed an unspoken level of communication and mutual trust.

"When I play with Woody," says LoCascio. "I don't have to worry!"

New York born pianist and composer LoCascio has made Houston his home for more than 30 years. He's recorded and performed with an impressive number of jazz musicians, including Chet Baker, Randy Becker, Freddie Hubbard and Dave Liebman.

" I grew up with Chopin, Bach, the Beatles, the Rascals, the Four Seasons, Motown…I was listening to Stravinsky before I listened to jazz."

His recordings include the haunting In The City of Lost Things, with Thomas Helton on bass and Richard Cholakian on drums, and the burning 2006 set A Charmed Life, with John Adams on bass and Ed Soph on drums. LoCascio can swing like nobody's business (I'm really baffled by other writers who use the word "restraint" to describe his piano playing). He can also create a hovering, and haunting sense of stillness and repose, as he does on the track "La Balle Lucia" from A Charmed Life.

LoCascio began playing piano at a very early age, thanks in part to being tricked by his parents into committing to ongoing piano lessons as long as they agreed to buy him a piano. ("I ask you," says LoCascio. "Is that fair to pull on a four-year-old child?"). He also developed his ear at a very early age by playing on the piano, by ear, songs his father requested after hearing them on the local Muzak radio station. For the majority of his teenage years, LoCascio was preparing himself for a career as a classical pianist and composer.

So when did jazz come into his life?

"Late," says LoCascio. "I grew up with Chopin, Bach, the Beatles, the Rascals, the Four Seasons, Motown…I was listening to Stravinsky before I listened to jazz."

LoCascio went to college at the University of Bridgeport to study composition, and recalls being "thoroughly intimidated by jazz, 'cause I heard these cats doing the most outrageous things. I'd never been exposed to it before." It's not without some irony that LoCascio had to leave New York, Long Island specifically, a place he confirms is, as pianist Kenny Werner described it, a "great cultural wasteland," and go to Connecticut to get his first real exposure to jazz.

After by chance hearing a friend improvising at a Fender Rhodes piano to an Oscar Peterson record, LoCascio was hooked, and in his words, "never looked back."

"I became the ultimate jazz snob," says LoCascio. "And remained so for the next six years. I had a lot of catching up to do. I didn't want to have anything to do with classical anymore, even though that was my degree!"

Fortunately for LoCascio, his music instructors had a more pluralistic view of what music was and what its function could be.

"I was mostly interested in the composition program because of one particular teacher," LoCascio explains. "David Barnett. He was sort of our Nicholas Slonimsky. He was the most gentle, encouraging teacher. He saw this music as entirely functional. He used to take us out to do community performances of our music. He would organize things in the oddest places, like folk cabarets, you know? I remember doing a concert at the Carriage House where all they ever had there were singer/songwriter types."

"Music is meant to be played and listened to, the fewer barriers the better," says LoCascio. "We don't have to be pompous about it. The Composers Salon is one of the hippest things I've been involved in."

"Music is meant to be played and listened to, the fewer barriers the better," says LoCascio. "We don't have to be pompous about it. The Composers Salon is one of the hippest things I've been involved in."

In 1977, shortly after graduating college and eking out an existence as a jazz musician, LoCascio relocated to Texas to be with his family, who had settled in Houston years earlier. Since then LoCascio has become a crucial part of the city's ever-evolving music scene, be that contemporary composition (Witt recently premiered LoCascio's Scars, a concerto for tenor saxophone and fixed media, on a concert of electro-acoustic works by LoCascio as well as composers Chapman Welch, and Kevin Patton) or jazz in all of its forms.

When asked about the upcoming Duets concert and the challenges one experiences playing in a duo setting, Witt says, "It's just such an intimate setting. It really puts more focus on the individual performers."

"I've played with (Joe) for so long," Witt continues. "When you play with somebody for so long, you have such a deep understanding of what they do. How they play, how they deal with music, their concept of rhythm, harmony, melody, phrasing, the sound that they produce."

I asked LoCascio if he could give me an idea of what people can expect to hear when he and Witt take the stage at Moores Opera House.

"I can't say for sure," LoCascio says. "But I don't think it'll be a waste of your time. Some of (what you hear) might be excruciatingly good, some of it might put you on the edge a little bit, but I can promise you all of it is going to be musical."