A rendering of the new 14-screen Edwards Theatres ShopWestOaks.com 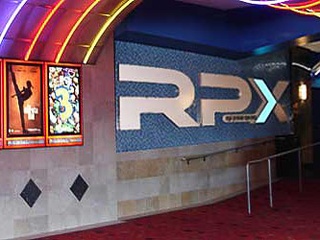 The new location will include an auditorium fitted with the new giant screen all-digital format called the Regal Premium Experience. Regal Entertainment Group

Summer is prime movie season, so for Houstonians near West Oaks Mall it's probably felt like eons since the mall's Alamo Drafthouse closed on June 25. The good news is that the 14-screen Edwards Theatre that's been under construction at the West Oaks retail center is almost ready to open.

Before the new Edwards opens its doors to the public on Aug. 23, it will offer three days of preview deals.

Before the Edwards opens its doors to the public on Aug. 23, it will offer three days of preview deals. From Aug. 20-22, theatergoers can enjoy $2 tickets, $2 popcorn and $2 sodas, with all proceeds going to benefit the Readers are Leaders Foundation, Big Brothers Big Sisters of Greater Houston and the American Red Cross of Houston.

The new Edwards will include one premium theater that features an all-digital video and audio system dubbed "RPX," which includes uncompressed surround sound and RealD 3D capabilities on a screen that's over 50 feet wide.

Of course movie fans that would rather enjoy the movie with a beer and without children or texters still have the Alamo Drafthouse in Katy, and have two new Alamo theaters to look forward to in 2013 — one in Vintage Park and another long-awaited location in Midtown.

A rendering of the new 14-screen Edwards Theatres ShopWestOaks.com