Why do we know the theme song to Gilligan's Island and not Modern Family?

Why do we know the theme song to Gilligan's Island and not Modern Family? 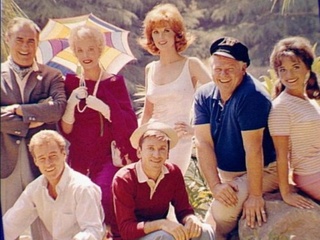 The cast of "Gilligan's Island"

The into to "The Brady Bunch"

Sherwood Schwartz passed away this week. For those of you outside the baby boomer bubble, Schwartz was the person who produced the iconic '60s television shows The Brady Bunch and Gilligan’s Island.

I heard an interview Schwartz did with NPR from a few years ago. In it, he told the story of how television executives were concerned viewers would not get how the castaways ended up on Gilligan’s Island (I always wondered why some of the passengers packed three months of wardrobe for a 3-hour tour, but I digress).

His solution was to tell the story in the show’s opening song. Harry Belafonte and calypso were very popular in those days and Schwartz wrote a very memorable theme song for Gilligan’s Island that I can still sing word for word to this day.

I never miss Modern Famil y, but I couldn’t hum the music they use to open the show.

The interview got me thinking about today’s televisions shows.  Were their opening theme songs as memorable? I never miss Modern Family, but I couldn’t hum the music they use to open the show.  Does the C.S.I. franchise, which uses songs from The Who, and Hawaii 5-O, which kept its roots by using the original theme, count?

So what changed?  Are TV themes less relevant today, or have I turned into an old curmudgeon who waxes nostalgically starting sentences with “Back in my day…” and “Kids today have no sense of…”?

My guess is a little of both.  There are fewer “shared experiences” today.  One person is in the living room watching American Pickers while another is in the bedroom watching Dancing with the Stars.  We didn’t have that many choices (or number of TV’s) back then, so we watched shows like Gilligan’s Island together.

Still, I wouldn’t mind sitting on the couch with my Ovaltine and humming along with a TV show telling anyone who will listen to my "back in the day" stories one more time.

How many words in The Brady Bunch theme song do you know? Sing along......

The cast of "Gilligan's Island"