The Review is In
An explosive violinist fizzles: Dan Zhu struggles to live up to the hype for Texas Music Festival finale

The Arthropologist
What it's like to be inside The Lion King: Performer spills the secrets, from puppets to stilts to that cheetah
LATEST NEWS
Major new Rice study reveals what Houstonians care about most in 2021
The CultureMap Interview 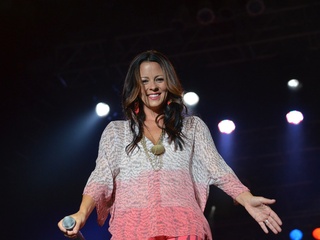 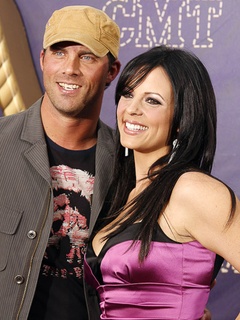 After a six-year hiatus from the recording studio, Evans is back, happily remarried to a hunk of a man — that would be Jay Barker — raising little ones and thinking about adding one more to the mix. Photo by Ed Rode

Juggling a full house of nine isn't for everyone. Neither is a career as a country music star, Dancing with the Stars contestant and author.

Singer/songwriter Sara Evans' journey hasn't been all fun and games. An ugly divorce which included gag orders, alleged adultery and a lawsuit from a former nanny resulted in a six-year hiatus from the recording studio. But with her latest album Stronger, Evans is just that, happily remarried to a hunk of a man, raising little ones and thinking about adding one more to the mix.

Alongside Billy Currington, Evans will headline Houston's official Fourth of July celebration "Freedom Over Texas" Wednesday. CultureMap chatted on the phone with the Grammy Award-winner and two-time Country Music Association Female Vocalist of the Year to talk about her latest album, her family and what we will hear from her on Independence Day.

CultureMap: Is your album Stronger autobiographical? It seems that it summarizes your life experiences quite succinctly. Am I inferring too much by saying it allowed you to express the kinds of things you couldn't talk about publicly?

Sara Evans: I know everyone wants to make that connection, but all these songs came about after I was happily remarried. The lyrics aren't really my story, though I am a stronger person today than I was prior — so that's true.

The story is really Hillary Scott's (of Lady Antebellum). The specifics of driving down a road, turning on the radio — that's all hers. I love it because the song is great, the lyrics are great and the melody is awesome. It's just a great country song.

I think that, as human beings, we can relate to that song because it's about facing challenges in life and striving to become the best version of ourselves.

CM: It was your minister Joe Beam who first introduced you to Jay Barker. At first you became close friends, then you were married. How important is faith in your life? And do your religious beliefs seep into your art?

SE: My faith is very important. My relationship with the Lord is the most important thing in my life. I think it's the centerpiece from which we do everything. All my decisions are based around that. In some ways my religion is aligned with my art, what I choose to do and not to do, and what I choose to sing about.

Of course that doesn't mean that I haven't made mistakes in my life and career, though I always try to think whether I am being a good example to young people and to other moms.

As a singer, I love delving deep into human emotion, into what happens when people are hurting, when they drink too much. I sing songs about people, about how it feels to be brokenhearted — that's the essence of country music. Sometimes I portray the victim.

As faithful as I am to my religion, I don't forget that I am a female country singer/songwriter, influenced by great women like Patsy Cline, Tammy Wynette and Kitty Wells, whose sound I trained on.

CM: Do you strive to be a role model?

SE: I don't necessarily strive to be a role model — I don't think I am. I see myself as a work in progress and strive to be a better version of myself everyday, do better than what I did yesterday.

At the same time, by default, some are going to look at me as a role model, especially young girls. That's the reality. People are reading my tweets, paying attention to what I am doing. I try to be someone who speaks for things that are good.

CM: You are the modern day Brady Bunch family. From your previous marriage, you bring in three kids and Jay brings four. And now you are thinking of adding one more.

Have your kids adjusted well? It seems like everyone is paying attention to how your family is getting along.

SE: It's really an interesting situation over here, being in a blended family. Unfortunately so many marriages end up in divorce and as such, people are really interested in my situation. Many families out there are in the same situation, living with stepkids, stepparents, stepgrandparents and so on.

Jay and I have an incredible dynamic. All the kids are between 7 and 13 years old. Not one is in college; they are all in elementary and middle school. We got together five years ago and were married a year later. Audrey, who's now 7, doesn't even remember the wedding. They've all adjusted very well.

We have been so lucky to have the love, chemistry and connection we have. The children have that too. They share our personalities. We are a sports family, very athletic. We play together as much as we can. As far as the children goes, we have not had many bumps in the road — knock on wood. Several are about to become teenagers — wish me luck!

We try very hard to be traditional, strict parents. Our kids definitely respect us. They know that what we say goes. Though we try to not be a child-centered family, we are involved in their lives, at the ballpark and on the tour bus.

CM: Have either Avery, Olivia and Audrey expressed interest in music?

SE: All of them have! Avery is a rapper and a drummer and writes incredible rap lyrics. Olivia has a beautiful voice. Audrey is a dancer. We joke that we have the whole show setup ready to go on the road.

Of course they grew up on the road. They learned to potty train and walk on the tour bus, and they've all been on stage. They are used to being a part of public life since they were born, so it's natural they would express an interest in pursuing something in music and entertainment.

CM: The country is going through a transition. Though we often say that we live in the greatest country in the world, we have our share of problems. What do you think is America's most pressing issue, one which has to be fixed?

SE: I am most passionate about family. I know I went through a divorce, and I am very opposed to divorce. I had to face that and go through it. I was blessed that Jay and I were brought together.

A family unit is so important. For America to be strong, the family unit has to be strong. We are moving further and further from that. When we're looking at technology, it's so difficult to get each other's attention.

I wish Americans would return to a time when being together as a family was an everyday thing, spending time together and eating dinners together. So many parents are so busy that they are not able to pay attention to what their kids are doing, and that's a sad thing. Or the opposite is true, that we can live in a child-centered world where we give kids anything they want and live through their activities and sports. Parents often do not take enough of a traditional role.

That parental structure is great for kids, they sense that stability and feel safe.

CM: What's your ideal way to spend the Fourth of July?

SE: It would absolutely be with my family. I would take my family to spend it with my mom in New Franklin, Missouri. She hosts a big fish fry where all my extended family gets together. So it would be my kids in my mother's farm playing basketball with all the aunts, uncles and cousins. Of course we would do my favorite thing, sit around the dinner table and talk, and laugh a lot.

CM: What will Houstonians hear from you at "Freedom Over Texas"?

SE: I have to sing all my hits, you know, everyone wants to hear those songs. I'll throw in a few cover tunes, some new songs like "Anywhere," my new single written with my brother Matt.

CM: And who will you be wearing?

SE: I have no idea! I have a stylist that brings some options. About two hours before the show we try a few combinations and that's it. I am very low maintenance when it comes to that.

"Freedom Over Texas" is Houston's official Fourth of July party from 4 to 10 p.m. at Eleanor Tinsley Park. Headliners Billy Currington and Sara Evans will perform alongside nationally-recognized and local performers. The event ends with a fireworks display.