With In the Family, Houston-born filmmaker Patrick Wang maintains his independence

With In the Family, Houston-born filmmaker Patrick Wang maintains his independence 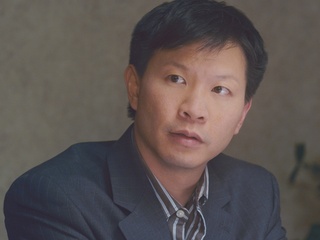 Patrick Wang, In the Family writer/director/star 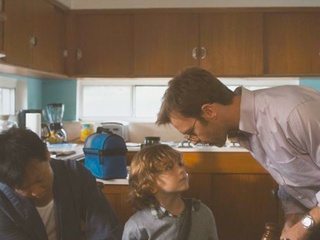 Joey (Patrick Wang), left, and Cody (Trevor St. John), right, with their son, Chip (Sebastian Brodziak), in a scene from In the Family In the Family

If you look up the word “perseverance” in The Independent Filmmaker’s Dictionary, chances are good you’ll find a picture of Houston native Patrick Wang next to the definition.

Wang – a Clements High School alumnus and MIT graduate – is writer, director and star of In the Family, a highly acclaimed indie drama set to kick off an exclusive H-Town run this weekend at the AMC Studio 30. (He’ll be on hand at the megaplex for a Q&A after the 6:30 pm Friday screening.)  He admits that the movie is very much a labor of love. For a while, however, it seemed like it would bring him nothing but heartache.

Right from the start, Wang knew In the Family – his first effort as a feature filmmaker after years of work as a stage actor and director – might be challenging for many audiences because of its austere aesthetic. (There are lots and lots of long single takes during a two-hour-and-49-minute running time.)

His movie was rejected by nearly 30 festivals before he opted to open it on his own last November in a single Manhattan theater – a gamble that paid off handsomely when The New York Times hailed In the Family as “a remarkably fresh and unpredictable drama.”

And, yes, he knew some casual moviegoers might be turned off by its story involving a small-town Tennessean (Wang) and his legal battle for custody of his late male partner’s young son (Sebastian Brodziak).

But what Wang didn’t expect is the resistance he faced while trying to get In the Family accepted by a film festival – any film festival, of any sort, anywhere. In fact, his movie was rejected by nearly 30 festivals before he opted to open it on his own last November in a single Manhattan theater – a gamble that paid off handsomely when The New York Times hailed In the Family as “a remarkably fresh and unpredictable drama” and “one of the most accomplished and undersold directorial debuts this year.”

A few months later, Roger Ebert weighed in with an even more enthusiastic four-star rave: “I was completely absorbed from beginning to end. What a courageous first feature this is, a film that sidesteps shopworn stereotypes and tells a quiet, firm, deeply humanist story about doing the right thing. It is a film that avoids any message or statement and simply shows us, with infinite sympathy, how the life of a completely original character can help us lead our own.”

But even after picking up a nomination at the Independent Spirit Awards — and, yes, getting some long-overdue festival exposure —Wang is continuing to go the self-distribution route. That’s why he’s returning home to Houston this weekend, and why he called a few days ago from his current home base in New York.

CultureMap: After you got to Rejection No. 22 or 23 – how were you able to keep pressing on? I mean, how did you even muster enough optimism to make another trip to the post office to send off another DVD?

Patrick Wang: [Laughs] Well, one of the things that does happen is, you do get a certain type of message. And you look for a life elsewhere. But I love the movie. I saw things in it that I hadn’t seen in a film before, that I adored. And I thought it was worth fighting for. At some point, I admit, I started sending out the DVDs with a little less hope. And I started looking for other ways to find an audience, other ways to get it into the world.

CM: And so you decided to risk booking it into a New York theater on your own.

PW: And it was funny: At the time when the New York Times review came out, and mentioned we’d been turned down by 30 festivals — we actually were a couple shy of 30. We weren’t really at 30 yet. And at first, I felt a little bad that the Times had said 30 — even though I understood why they would round it out to that number. But my conscience was put at peace because, even after the Times review, festivals continued to reject the film.

CM: You mentioned in an interview you did with Michael Tully of Hammer to Nail that while you actually shot in New York, you set the film in Martin, Tennessee partly because of an old friend – your “host sister” from the family you stayed with while you were an exchange student in Argentina.

PW: That’s correct. She and her husband moved there for a while. But that’s not the only reason I set it there. Thanks to her, I know something about Tennessee — but not a whole lot. So having that freedom for myself was kind of nice.

And I liked setting the movie in the South because I don’t think the South always gets the most interesting treatment in films. It can be a diverse place, it can be an accepting place, a surprising place – just like anywhere. And I think that a lot of times – especially in movies – we make wrong assumptions without knowing what it’s really like living in a place.

I think that by setting the movie where I did, I give people who are living in other places, like here in New York, something to be surprised by. The thing to remember is, Martin is not a small town, it’s a mid-sized town. There’s a division of the University of Tennessee there. And a lot of people from different parts of the world show up there. That’s how I depicted it in the film.

CM: Speaking of assumptions: I’m sure some people will hear what the movie’s about, and automatically assume it’s going to be overtly political – a “message movie.” But there’s really no specific reference to issues like same-sex marriage or adoption rights for gay people. Were you consciously striving not to make such references in the dialogue?

PW: Not really. I did notice when I was about halfway through writing the script that there was certain language about identity and political terms that wasn’t showing up. And I think it wasn’t showing up because during the particular scenes we were showing, in the moments of these people’s lives – it didn’t seem to be the language that they would use. And in the end, I really liked that. At a time when politics get very divisive, and words get very divisive, it was nice to be in this more neutral territory linguistically.

That also seems to be very much in line with the realities of these people’s lives. And it kept me away from this becoming a very political or agenda-driven piece from the writing perspective. I liked where it was going – and I think it kept me honest. And I thought it was very reflective of the way people talk about their own lives. Or don’t talk about their own lives.

CM: OK, you served as writer, director and star in your very first movie. And you shot it on a tight schedule – three six-day weeks. Could you have possibly have made it any harder on yourself? Were you actually trying to prove that the term “industrious Asian” isn’t just a cliché?

PW: [Laughs] The funny thing is, a lot of people see all the titles and think how much work it must have been for me. But the thing that exhausted me like nothing else was having the kid [Sebastian Brodziak] on set, and being a dad to him all day. Because, you know, we bonded, and he wanted to hang out, and I’d be carrying him around all day on the set. That was exhausting. That was probably a bigger challenge than all the other jobs.

CM: There are several long single-take scenes throughout In the Family. Is that reflective of your background in live theater?

PW: I think that what theater did was, it gave me more confidence in what a long take could achieve. I knew that you could communicate quite a bit that way, and allow the audience to simply observe the actors. But I was also fascinated by what you could do with a cut. And I was fascinated by the field of view – this great flexibility of field of view that you don’t have in theatrical design. I was intrigued by the idea of deciding where you would establish the frame on all four sides. That interested me as much as deciding where to cut.

And it’s like anything else that you’re doing for the first time. Your awe of it is such that you don’t start using it left and right. You feel the power of it each time you make a decision. And I liked the idea of a minimalist approach. The fact that if you use these elements sparingly, each time you do use it, it’s more impactful.

CM: You’re continuing to self-release your film. How difficult has this been for you?

PW: It has been very challenging. Once you can get people into the theater, I know what’s going to happen, because we’ve had an overwhelmingly positive response from a wide range of people. And that’s really the only reason why I’m kind of putting my back into this: I want more people to have the opportunity to see it. Particularly people who might not think they’d have that response because of the aesthetic of the film or the topic. But it’s a challenge to convince people that there’s something here that they didn’t know they’d like or need. Especially when you really can’t compare this movie to any other movie out there.

But I have to say I’m getting to learn a lot. I’m getting to know a lot of communities through their theaters. And I’m getting to talk to a lot of audiences. One of the things that happen when you have a big distributor is, maybe they’ll open your film in several cities, and maybe you’ll tour a little bit. But there’s this distance between you and the audience. And I feel like I have the great pleasure, the great opportunity, to really get to know my audiences. I still sit through a lot of screenings. And getting to experience it with an audience that’s seeing it for the very first time – that keeps me going, I must say.

Patrick Wang, In the Family writer/director/star