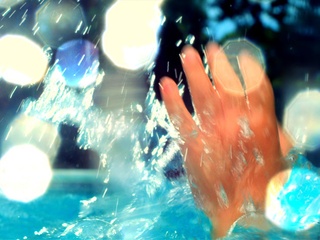 Stealthily unsettling and exceptionally well crafted, Nate Taylor’s Forgetting the Girl lays early claim to being the sleeper hit of this year’s WorldFest/Houston International Film Festival. But to say much more about the indie-produced psychological thriller – which screens at 9 p.m. Sunday at the AMC Studio 30 – is to risk spoiling a few genuinely ingenious plot twists.

Of course, some might argue that just announcing an avoidance of spoilers is in itself the springing of a spoiler. Because, after all, once you indicate there are indeed plot twists on the horizon, you’re more or less warning viewers to take nothing at face value, to remain extra vigilant as they maneuver through the narrative mine field – and to not get caught up in the suspenseful story and the savvy storytelling. Which, unfortunately, can greatly diminish the simple pleasures of being blindsided by the unexpected.

The movie boasts one scene that is truly shocking, another that is ineffably heartbreaking, and one more that is slyly comical in the naughty way it upends expectations.

But never mind: Working from an adroitly constructed screenplay by Peter Moore Smith, Taylor has made a movie that cunningly plays on your awareness of other movies, and allows you to assume that you’re going to be “surprised” in ways you’ve been surprised dozens of times before in dozens of other thrillers. And then he pulls the rug out from under you – at least twice by my count, and maybe more by yours.

So it’s reasonably safe to give you the following bare-bones synopsis:

Kevin Wolfe (Christopher Denham), a studio photographer who specializes in headshots of actresses and models, is a pleasant young man with an unpleasant past. After enduring a childhood trauma, he has developed various methods for forgetting anything or anyone that troubles or embarrasses him. And that comes in very handy for Kevin: He’s chronically compelled to erase burdensome memories because – in large part due to his emotional neediness – he repeatedly tries too hard, and fails too dismally, while trying to connect, romantically or otherwise, with the women he photographs.

Kevin spends so much time reaching out to these women, and then repairing his wounded pride and/or soothing his bruised psyche, he doesn’t seem to fully appreciate, or even recognize, two things the audience can’t help noticing: Tanner (Paul Sparks), his porn-loving landlord, is quite a creepy fellow, and Jamie (Lindsay Beamish), his Goth-chick assistant, wants to be much more than an invaluable employee.

Forgetting the Girl percolates with slow-simmering suspense throughout much of its running time. It also boasts one scene that is truly shocking, another that is ineffably heartbreaking, and one more that is slyly comical in the naughty way it upends expectations. The great Howard Hawks once defined a good movie as three good scenes and no bad ones. Forgetting the Girl is a good movie.

Following in the tradition of filmmakers as diverse as Adrian Lyne (whose Unfaithful he cites as a major influence) and Gore Verbinski, Taylor comes to features after a successful career as a director of attention-grabbing, award-winning TV commercials. (His resume includes national spots for GE, Pepsi and Verizon.) He got his feet wet editing the indie dramedy Kissing Jessica Stein, and decided to make his first big splash in movies after a fortuitous collaboration with commercial writer and creative director Peter Moore Smith.

“While we were working on a spot,” Taylor says, “I showed Peter some gritty, no-budget web commercials I had just shot. He took one look and said, ‘I have a script that I think you would love.’”

Mind you, Smith’s appraisal of that script – Forgetting the Girl – might have been a bit skewed, since he, like, you know, was the guy who wrote it. Still, Taylor says, “I immediately read his screenplay – and sure enough, it resonated very strongly with me. I immediately knew I needed to make it into a film.”

Taylor devoted five years to raising financing for the project, and appeared to have everything in place to begin casting and pre-production in the summer of 2008. But then came The Great Financial Meltdown – and most of Taylor’s funding quickly evaporated. So he drastically trimmed the budget, called in favors, and eventually shot Girl on a frayed shoestring and an accelerated schedule in and around his home base of Manhattan.

“The project was very ambitious,” Taylor says. “Eighteen days of shooting, in six-day weeks, covering five-and-a-quarter pages of script per day, spread out in 24 different locations all over New York City. With such demanding requirements, we were forced to work in some pretty extreme conditions.”

“We spent one week shooting on a set we built inside a warehouse in Greenpoint, Brooklyn. It was the middle of August, and the place didn’t have any air conditioning, so it was like working inside a huge brick oven.

“To make it worse, we had a ton of big, hot tungsten lights running in there, which just pushed the temperature to unbearable levels. We could run fans between takes, but had to turn everything off for sound when we were rolling.

“It was brutal. Especially for our cast, who were just sitting under those lights, cooking. It made shooting out on the famously humid New York City streets seem pleasant in comparison.”

The work didn’t end when the cameras stopped rolling. In fact, the post-production process proved to be in some ways even more grueling than the actual shooting, as Taylor and his collaborators – many of them, like him, veterans of TV commercial production – gave the small-budget indie the most impressive polish possible.

“We finished the film like it was a big-budget national TV spot,” Taylor says. “With a 30-second commercial, it’s so short, you can really focus on every single frame and make sure everything’s perfect. We applied the same high-end craftsmanship to this film – obsessing over all the meticulous details.”

And since Forgetting the Girl is an 85-minute feature, not a 30-second commercial, that required a humongous amount of work from every member of the post-production team.

“We spent about eight months color-correcting the final film, spending time crafting the palette of each individual shot. We ending up doing (visual effects) and clean-up on over 200 shots in the movie. Which is a ridiculous amount for a dialogue-driven drama.”

Not that Taylor is complaining, you understand. “Even though most viewers probably wouldn’t notice the little things we adjusted, I’m a firm believer that all the details add up to affect the whole. For this particular story to have the proper emotional impact on viewers, the mood needed to be carefully sculpted and controlled.

“All in all, it was a huge task for everyone involved. But the process imbued the film with an amazing visual atmosphere which accomplished exactly what it needs to in terms of the viewer experience.”