After slow start, Seth shines as Argo grabs gold at one of most entertaining Oscars in recent years

After slow start, Seth shines as Argo grabs gold at one of most entertaining Oscars in recent years 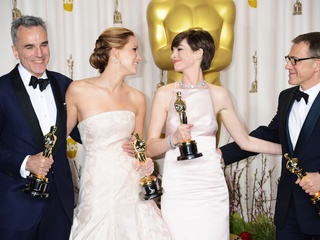 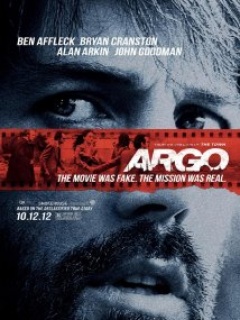 Argo grabbed the Best Picture Oscar even though it won only two other awards.
After a slow start, host Seth MacFarlane hit his stride with some funny bits. Photo by Mark Davis/Wire Image

And with that, one of the more briskly paced and consistently amusing Oscarcasts in recent years drew to a close Sunday evening as Ben Affleck’s sensationally smart and suspenseful fact-based drama picked up the glittering prize for Best Picture.

Mind you, even with its grand total of three Academy Awards – in addition to nabbing the big enchilada, it won trophies for Editing and Adapted Screenplay as well – Argo didn’t take home the biggest haul of golden statuettes. Life of Pi actually scored four wins, in the Cinematography, Original Score, Visual Effects and Best Director (Ang Lee) categories.

Argo  is the one that will be remembered, rightly or wrongly, as a victorious underdog.

But Argo is the one that will be remembered, rightly or wrongly, as a victorious underdog, one that edged out two worthy rivals that had, at various points during this season’s interminable Oscar sweepstakes, appeared to be front-runners: Steven Spielberg’s Lincoln (which settled for Best Actor and Production Design awards) and Silver Linings Playbook (which claimed only one Oscar, a Best Actress accolade for Jennifer Lawrence).

As for the Oscarcast itself: I must admit that, a few minutes into the program – specifically, the length of the jaw-droppingly off-putting “Boobs” production number – I briefly considered the possibility that host Seth MacFarlane was deliberately striving for dishonors as Worst Oscar Host Ever.

Maybe that was supposed to be part of the joke triggered by William Shatner’s jokey appearance as Captain Kirk, who supposedly was beaming back from the future to warn MacFarlane that his tasteless comedic shtick would chart heretofore unplumbed depths of suckage.

Throughout the entire program,MacFarlane sustained an artful balance of snarky wit and zesty enthusiasm.

Fortunately, however, the longer MacFarlane’s opening segment continued, the funnier it got. (Kudos to Shatner – and to Sally Field, who may have lost the Supporting Actress prize, but earned top honors as Best Sport Ever.)

And throughout the entire program – with the arguable exception of a final number with frightfully chirpy Kristin Chenoweth – MacFarlane sustained an artful balance of snarky wit and zesty enthusiasm.

Other elements of the Oscarcast worth noting:

During last year’s Oscarcast, Angelina Jolie inspired an instant Twitter account – “Angelina Jolie’s Leg” – with her brazen display of a shapely limb during the telecast. This year, some Tweeters noted that, even before the Oscarcast actually began, Anne Hathaway – the Supporting Actress prize-winner for Les Misérables – inspired a pair of Twitter accounts (@annesheadlights and @hathawaynipple) with her braless look on the red carpet. To which I replied: Well, of course there are two of them.

Every so often, Quvenzhané Wallis of Beasts of the Southern Wild could be seen in the audience playfully flexing her muscles, as though giddily acknowledging just how amazing it was that someone so young (and so talented) could be an Oscar nominee.

All of which prompted MacFarlane to warn other hopefuls not to get too stuck on themselves: “So you got nominated for Oscar – something a 9-year-old could do.”

WORST GAG OF ANY SORT

MacFarlane rightly praised Daniel Day Lewis’ Oscar-worthy performance as Abraham Lincoln – and offered props top Raymond Massey’s portrayal of The Great Emancipator in Abe Lincoln in Illinois (1940). Even so, he added, “I would argue that the actor who got most inside Lincoln’s head was John Wilkes Booth.”

MacFarlane tried to make light of the audience’s audible disapproval of his remark. But that didn’t make it any less inexcusable.

Some haters have accused Anne Hathaway of seeming too “rehearsed” in her acceptance speeches during this awards season as she’s claimed multiple accolades for her performance in Les Misérables. A performance, it must be acknowledged, that consists largely of her deeply affecting rendition of the song ”I Dreamed a Dream.”

But you know what? When Hathaway gasped, “It came true” at the start of her on-stage remarks – well, hell, I was a goner.

Ang Lee gets his Best Director prize, and says, “Thank you, Movie God.”

(By the way: Lee showcased his first feature, Pushing Hands, several years ago at WorldFest/Houston International Film Festival. Neither he nor his movie generated a lot of attention from local audiences at the time. Remember that as the 2013 WorldFest/Houston approaches – you maybe be hearing a lot more in the future from the unknowns on this year’s program.)

The tribute to fifty years of James Bond movies was cleverly assembled – but, really, the film-clip montage served merely as an introduction to a dazzling performance by Dame Shirley Bassey, who belted out the theme from Goldfinger with her customary pizzazz while demonstrating that, at age 76, she’s still one of the more sizzling songbirds around.

With all due respect to Adele – who rocked the house with her rendition of this year’s Oscar winning 007 theme, Skyfall – there is nothing like a dame.

How do you think Seth MacFarlane did as Oscar host? Should he be invited back again? Tell us in the comments section below.