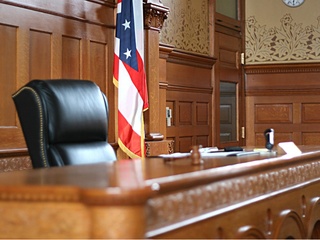 House Bill No. 2 has been in and out of courtrooms since being passed in 2013. uscourts.gov

Less than two weeks after a federal appeals court upheld Texas' controversial new abortion law, the U.S. Supreme Court issued a ruling partially blocking its enforcement. The order reverses a decision from the U.S. Fifth Circuit Court of Appeals that would have closed all but eight abortion clinics in Texas.

The five-sentence Supreme Court ruling states that clinics do not have to meet stringent standards of an "ambulatory surgical center." The 6-3 decision represents at least a temporary victory for abortion rights advocates.

The ruling will keep more than a dozen abortion clinics across the state open while the appeals process takes place.

It's the latest salvo in an already lengthy back-and-forth legal battle of House Bill No. 2. Although it has a different name, this is the same law first made famous by Fort Worth Sen. Wendy Davis, who successfully filibustered the first version of the bill. She is now the Democratic candidate for governor of Texas.

Under HB2, all abortion facilities must satisfy ambulatory surgical center requirements, and the physicians who perform abortions need admitting privileges at a nearby hospital. U.S. District Judge Lee Yeakel previously stayed the new restrictions, calling them unconstitutional. That prompted an appeal from Texas Gov. Rick Perry.

The Supreme Court's ruling will keep more than a dozen abortion clinics across the state open while the appeals process takes place. In a statement, Davis praised the order.

"The court recognized that these deeply personal decisions should be made by a woman with the guidance of her family and her doctor," Davis said. "The actions by Austin politicians like Greg Abbott had closed all but eight Texas reproductive health centers and harmed the health and safety of hundreds of thousands of women throughout the state."

Abbott, Davis' Republican challenger for the governorship, did not immediately issue a statement about the Supreme Court decision. When the ruling was handed down by the federal appellate court in early October, Abbott's spokesperson Lauren Bean said the closure of all but eight abortion clinics would "protect the health and safety of Texas women."

Most observers believe the case is headed to the Supreme Court for the ultimate decision. Three judges on the Fifth Circuit will have yet another go at it first, with oral arguments expected by the end of this year or early next year, MSNBC reports. But whatever decision is reached in the lower court will almost certainly be appealed to the nation's highest court either this term or the next — just in time for the 2016 presidential election.