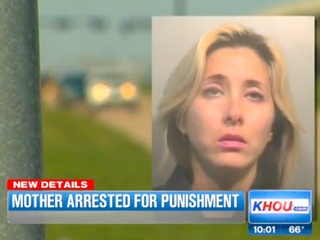 At approximately 8:25 p.m., police in League City received a report of a lone child walking on the shoulder of the 2100 block of the Gulf Freeway.

Officer Reagan Pena of the League City Police Department told KHOU 11 News that the mother and her son had an argument and she became frustrated. This ultimately led to the boy being forced out of his mother's vehicle and told to walk home as punishment. According to police, the mother was driving her vehicle, a white Audi A4, about 300 feet in front of her son, but the boy could not see her car because it was dark. He reportedly walked for about 15 minutes before a passerby called the police.

The mother, 34-year-old Angela Graciela Garcia, was arrested and charged with abandoning and endangering a child. She was still being held Tuesday at the Galveston County jail on a $7,500 bond.

Garcia had another son in the car and both children were released into the custody of their father following the arrest.