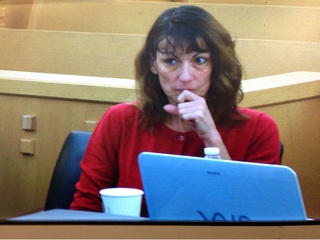 Michele Williams faces up to life in prison. Photo by Claire St. Amant

The jury asked to see crime scene photos from the house where Greg Williams was killed. Photo courtesy of Keller Police Department

After deliberating for seven hours, a Tarrant County jury found Michele Williams guilty of murdering her husband, Greg Williams, and tampering with evidence. She was found not guilty of moving her husband's body.

Greg's family members filled the prosecution side of the courtroom, along with Michele's brother. They listened intently as the guilty verdict was read; Michele showed no emotion.

During their deliberations, jurors asked to see Michele's written statement, crime scene photos of the couple's Keller home and photos the medical examiner took of Greg's body. They also asked to inspect the gun with a yardstick.

The trial lasted a week. Michele's defense was that her husband killed himself. She did not testify.

During closing arguments, prosecutor Sheila Wynn dispelled any notion that Michele panicked after finding Greg dead from suicide and made a split-second decision to clean the scene. "This is calculation. This is thinking about it. This is covering up what really happened," Wynn said.

Wynn and co-counsel Jack Strickland broke down the different stories Michele told police — and CBS News 48 Hours — about the night Greg died. After initially telling authorities that an intruder killed her husband, she eventually said Greg committed suicide and she staged a home invasion.

As she was handcuffed and led away, Michele began to cry. The 45-year-old faces up to life in prison, and the punishment phase of her trial begins Tuesday.

New to the story? Catch up on the Michele Williams case here:

October 31, 2013: The making of the Keller black widow: Did Michele Williams get away with murder?

May 2, 2014: Peter Van Sant dishes on what made Michele Williams case so intriguing to 48 Hours

September 26, 2014: Michele Williams doesn't testify in her own defense at husband's murder trial

Michele Williams faces up to life in prison. Photo by Claire St. Amant

Pandemic gardening? Here's how pollinators are important to your plants.

A sizzling chat with some fajita mavens, plus a proper teatime in Katy
Montrose's most exciting new restaurant, plus a trip to the Pacific
Houston's reigning king of meat reveals his smokin' new plans