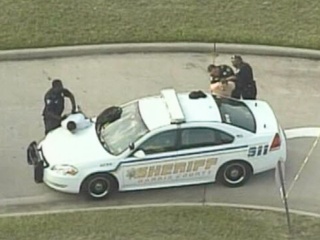 UPDATE: At a 10:50 a.m. press conference, Harris County Sheriff Adrian Garcia confirmed four victims, including a 17-year-old student who died at the scene. Two victims were rushed to area hospitals with minor injures and another underwent surgery at Memorial Hermann–Texas Medical Center.

At 4:30 p.m., the Harris County Sheriff's Office confirmed that 17-year-old male is considered the lone suspect. All involved are students at the high school.

A tragic Wednesday morning stabbing at Spring High School has left one teenager dead and two others rushed to area hospitals via Life Flight.

While details remain unclear, Twitter posts from students suggest that the incident started with a fight in the cafeteria. All three victims were students.

The Harris County Sheriff's Office reports that the stabbing occurred just before 7 a.m. at the school's campus at 19428 North Freeway near Cypresswood Drive.

Officials confirm that a student died at the scene and two others were flown to Hermann Memorial in the Texas Medical Center. Several news outlets note that a 16-year-old is in critical condition.

KHOU's Air 11 helicopter spotted deputies taking two handcuffed men into custody at 8:15 a.m., while the Houston Chronicle reports that deputies are searching for another identified suspect.

A mother who was attending a meeting at the high school Wednesday morning tells Fox 26 that she heard commotion coming from the cafeteria area. Moments later, an announcement over the intercom called for a school nurse. Chaos ensued in the school hallway, where the mother saw a trail of blood leading from the cafeteria to the back of the school.