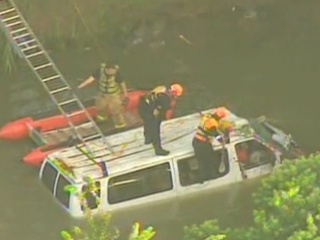 Seven people were injured when a van crashed into White Oak Bayou. Photo courtesy of KHOU

Seven workers plunged into White Oak Bayou during the early morning rush hour Wednesday when the driver of their van lost control and slammed the vehicle into the murky waters. But in what officials are calling a miracle, all survived with only minor injuries.

Houston Fire Department officials said the accident occurred around 6:44 a.m. when the van, which appeared to be traveling at high speed, exited the North Freeway onto the service road at Calvacade. According to an account in the Houston Chronicle, the driver veered into a median, smashed into a guard rail and a chain-link fence and plunged about 15 feet into the bayou.

"It landed on its wheels like a cat would."

Although the van nosed into the water and apparently hit bottom, it landed upright, which likely saved their lives, officials surmised. Four of the men climbed from the crumpled van and were on the roof when firefighters arrived, KHOU Channel 11 reports. The driver and all six passengers were taken to local hospitals were they were treated for minor injuries.

"It was a spectacular accident," HFD District Chief Robert Branch told the Chronicle. "It landed on its wheels like a cat would."

The accident remains under investigation.