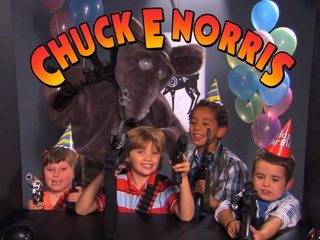 Chuck E. Norris — a birthday destination equally as miserable as the real thing, but with guns. JimmyKimmelLive/YouTube

Here's a story just begging for parody: An office building in Lewisville is currently undergoing transformation from a sea of cubicles to a 24-lane, air-conditioned shooting range.

Eagle Indoor Gun Range will be the first of its kind and the biggest in Texas, with two rooms available for children's birthday parties — because celebrating at a bowling alley or skating rink is just too passé — beginning in late summer.

"The age limit is 8 years old," owner David Prince told KXAN. "You have to be tall enough to get above the shooting table, OK. But they're not going to be left unattended."

The plan is to start novices off using BB guns and .22s.

Prince said that, if there aren't enough parents to accompany and supervise each child, one-on-one, the range will provide safety officers. The plan is to start novices off using BB guns and .22s.

It didn't take long for comedians to pick up on the news, of course, with an over-the-top but not-too-far-off Chuck E. Norris commercial sketch airing during Jimmy Kimmel Live on Thursday night — complete with a gun-toting mouse and children wearing birthday hats and ear muffs.

Tell us: Does the spot above look exaggerated and extreme or frighteningly possible?