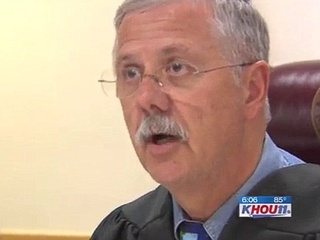 Think Generation Y is lazy and entitled? Well, for every teen that destroys a house trying to pull off the next Project X, there's a Diane Tran.

A junior at Willis High School, honor student Tran's class schedule is full of advanced placement and dual-credit courses, but that didn't stop Montgomery County Judge Lanny Moriarty from making an example out of her, sentencing her to 24 hours in jail and a $100 fine for truancy.

"The state of Texas is sentencing a young girl to a night of jail for being too emotionally and physically exhausted to go to school."

Tran admits she missed school, but it was because the 17-year-old was often exhausted. After her parents suddenly divorced and moved away, Tran was left in Willis to support herself, an older sibling in college and a younger sibling that is living with family in Houston. While maintaining her straight-A scores, Tran works a full-time job at a dry cleaners and a part-time job at a special events venue. A friend told KHOU that Tran often stays up until 7 a.m. completing her homework.

"I can understand if a child is staying out of school, running around, a bad kid, getting into trouble, taking drugs," Mary Elliot, Tran's boss at her weekend job, told ABC News. "I can understand why he would slap them into jail for 24 hours. But Diane doesn't do that.

"All she does is work and go to school."

Tran had already been warned once by the court about her attendance, and when she was absent from school last Wednesday, Moriarty sent out a summons and had her arrested in open court and jailed.

“If you let one run loose, what are you gonna’ do with the rest of ‘em? Let them go too?” Moriarty told KHOU, which first reported the story. When presented with the details of the teen's case, Moriarty said he hadn't considered vacating the sentence because it would make him look "soft."

But Tran's story has sparked international concern and outrage, getting picked up everywhere from Reddit to Gawker to the International Business Times.

"The state of Texas is sentencing a young girl to a night of jail for being too emotionally and physically exhausted to go to school. The institutions that are to provide resources to youth and ensure justice are instead punishing her like a criminal," reads a petition on Change.org that has gathered over 35,000 signatures. The petition asks that Moriarty cancel Tran's fine and sentencing, with some pointing out that having a criminal record could hurt the teen's dream of becoming a doctor.

The Louisiana Children's Education Alliance has also set up a website and a trust fund for Tran, and individuals have donated more than $38,000 already.