Heavy rains put a damper on getting around Houston; Art Car Parade start delayed on Saturday 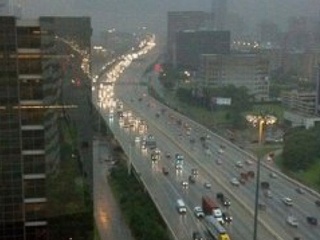 Heavy rains swept through Houston late Friday morning, stranding some motorists and making getting around town a mess.

The Harris County Flood Control District reported that "heavy and persistent rainfall is occurring over west/southwest and central Harris County," with as much as 2-1/2 inches of rain falling in 90 minutes.

"Bayous, creeks and tributaries are responding to the heavy rainfall, but remain within banks," Flood Control District officials reported.

At around 11 a.m., the Houston Fire Department was dispatched to rescue two people trapped in a vehicle by rising waters at Braeswood and Chimney Rock.

At around the same time, fire department officials transported a person struck by lightning at Metro North Office Park in 1700 block of Seamist to Memorial Hermann Hospital in the Texas Medical Center.

Due to the heavy rains in the forecast, the Art Car Parade will start at 3 p.m. on Saturday, two hours later than scheduled.

Due to the heavy rains, organizers canceled the Art Car Ball, scheduled for Friday night at the Orange Show Center for Visionary Art.

The 26th Annual Art Car Parade will take place on Saturday, but the starting time has been pushed back to 3 p.m. due to forecasts of more heavy rains in the morning. The new schedule is:

The Houston Police Department memorial service for fallen officers, scheduled for Friday at 7 p.m. at the Houston Police Officers' Memorial on Memorial Drive, has been moved inside to the nearby Fonde Recreation Center at 110 Sabine Street.

The National Weather Service reports that the primary threat is flash flooding and high water locations on roadways in areas where the heaviest rain falls.  A few isolated severe storms could produce some damaging winds and hail.

Check back with CultureMap for more details.