dust in the wind
Less storm shock: A wimpier hurricane season is forecast — with one big warning

Good News! Houston is only the eighth-worst city in the country for smog — Cali still dominates bad air

Good News! Houston is only the eighth-worst city in the country for smog — Cali still dominates bad air 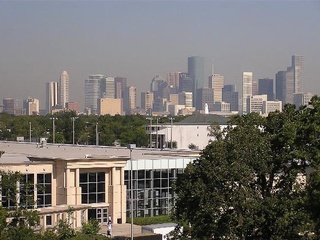 The American Lung Association has released its annual "State of the Air" report, and guess what? Houston-Baytown-Huntsville is the eighth worst city in the United States for smog.

(Los Angeles topped the list, of course, followed by six other California municipalities.)

This bestowal seems a given — Houston is a city of drivers! It is surrounded by refineries! Honestly, considering the haze obscuring the downtown skyling on Thursday morning, we thought we'd rank higher on the Lung Association's naughty list.

Houston has made some improvements, with 47.5 fewer high ozone days than in 1996.

But in terms of air quality, we still fail miserably: Harris County counted significantly more high ozone days than any other Texas county, and Dallas-Fort Worth ranked as the 12th most pollution-happy.

Austin-Round Rock-Marble Falls made it to the list of "cleanest U.S. cities for short-term particle pollution."