Tattered Jeans
A gullywasher couldn't stop this annual Irish fete; the flask of whiskey helped but not like you think

A concussion, a bad Bentley and a barn bender: Opening arguments in the John Goodman trial

A concussion, a bad Bentley and a barn bender: Opening arguments in the John Goodman trial 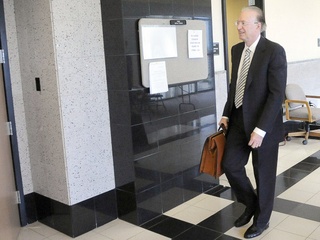 What's not under dispute is that John Goodman, a Houston-raised multimillionaire and the founder of the Wellington Polo Club, was out drinking at a charity event and at a bar before getting behind the wheel of his Bentley after midnight. Goodman later ran a stop sign and hit a Hyundai driven by 23-year-old Scott Wilson, knocking his car into a canal where Wilson drowned. Goodman did not render aid at the accident and did not call 9-1-1 for over an hour.

Stepping up first, prosecutors led by Assistant State Attorney Ellen Roberts tallied Goodman's $212 bar tab, which included Irish car bombs (a shot of Jaegermister dropped into a pint of Guinness), rounds of tequila shots, a drink called a "mind eraser" and a vodka-soda. Roberts said that according to Goodman's blood alcohol level taken after the crash, he'd had the equivalent of 16 to 18 drinks.

Roberts also mentions several damaging statements from Goodman to witnesses the night of the murder, from telling his girlfriend that he'd "fucked up," mentioning that he'd had a few drinks to the woman whose phone he'd borrowed, and even telling the 9-1-1 dispatcher that he "just didn't see" the other car.

But defense attorney Roy Black has a different explanation for the night's events. Black claims that Goodman only had a couple drinks that at The Players Club and was sober when he left. Black said he has experts that will testify that the accident was caused not by driver error but by a throttle that stuck, sending Goodman's Bentley surging forward into Scott Wilson's car.

Black explains Goodman walking away from the accident by claiming that he had a "grade three" concussion, plus a broken wrist and a back injury. Disoriented, Goodman walked from the scene to the barn of polo player Kris Kampen, where he proceeded to drink from Kampen's liquor stash. According to Black, Goodman's blood alcohol level was double the legal limit at the time of his post-crash test only because he went on a bender in the barn to numb the pain, not because he was driving under the influence.

Black is doing everything he can to create some reasonable doubt, but this theory stretches the definition of "reasonable." As the Broward Palm Beach New Times blog The Pulp put it:

Now, [we] knew the barn drink defense was coming. What we couldn't predict was that Goodman's defense team would ask a jury to believe he got trashed, alone, in his friend's barn, in a period of about half an hour. Yet he did not get drunk over the course of several hours, drinking with friends at two bars before he drove. Seasoned drinkers: Do you buy that argument?"